The National Institute of Development Administration (NIDA) is one of the prestigious public graduate universities in Thailand, operating under supervision of the Commission on Higher Education, the Ministry of Education. NIDA was established since 1966 from forward-looking vision of King Rama 9thwhere he was determined to advance Thailand’s development through the establishment of an advanced educational institution to prepare people to become agents of change for national development. That is why NIDA’s motto is “Wisdom for Change.” At the initial stage of its establishment, NIDA received financial support from Ford Foundation, the Department of Technical and Economic Cooperation, and the Midwest Universities consortium for International Activities (MUCIA). At its inception, NIDA was an autonomous institute affiliated with Thammasat University, which ran its own activities and managed its own budget. NIDA was not its first name since beginning. It first name was Graduate Institute of Development Administration (GIDA)before being changed into NIDA later when it became an independent university. An official establishment of NIDA as an independent educational institution took place once the School of Public Administration of Thammasat University, part of the training programs of the National Economic and Social Development Board, and part of training and teaching programs of the National Statistical Officer officially were merged together with a united objectives and visions. Since then, NIDA has become one of the Thailand’s leading educational institutions with provision of graduate degrees (Master and Doctoral degrees only), where its particular specialization involves management fields related to the nation’s development following the original vision of its foundation.

With 14 Presidents so far, NIDA currently has 10 graduate schools with particular aim to serve Thailand’s economic and social development. The 11 schools are provided as follows.

4. Graduate School of Language and Communication

Among its founding schools, NIDA Business School was the first graduate school in Thailand where an MBA program was offered. For a doctoral program in Business Administration, with close collaboration between NIDA, Chulalongkorn University, and Thammasat University, Thailand’s first joint doctoral program in business administration (JDBA) was established with funding of the Canadian International Development Agency (CIDA). This initiative was run through the Association of Deans of South East Asian Graduate Schools of Management (ADSGM). As a pioneer of business education in Thailand, NIDA Business School is the first school in the country where accreditation of the Association to Advance Collegiate Schools of Business (AACSB) was received. This can clearly demonstrate its quality of business education provision with the highest international standard.

As discussed in an overview section, NIDA was originally established to support national development in Thailand. Thai leaders in the past established NIDA based on strong belief that nation can be improved sustainably only when quality of education provided to people is enhanced, and this high-quality education is accessible to all Thai people. The key is that people themselves must be change agents, not government. This philosophy has underpinned NIDA’s development since its first establishment.

In the world of fast-changing economy, NIDA is among top universities in Thailand that proactively encourage innovative ideas and embed entrepreneurial ways of thinking in students through either formal educational programs and extra learning experience outside the classroom. At NIDA Business School, think-out-of-box and entrepreneurial mindsets are promoted and are attached to activities in most of the classes taught. Learning by doing is a core principle of NIDA’s educational provision. Thus, students are given opportunities to apply what they learn in the classes to real-world problems. It is necessary to ensure that students actually have ability to apply knowledge obtained from the classes to the ways they solve the real problems out there. To support notions of innovation and entrepreneurship, crazy solutions proposed by students in their works are always welcome and encouraged by professors and their colleagues. A good example of NIDA’s promotion of innovative ideas and entrepreneurship is a foundation of “Black Canyon,” which is the first Thai-owned specialty retail business that has been pioneered by Thais since 1993, and has been recognized as one of the well-known business legends in the country. An original idea of starting Black Canyon stems from a project conducted by a student during studying MBA at NIDA Business School. With close advice and some of financial assistance invested by the school’s faculty members at that time, Black Canyon was established since no any single coffee retail chain was run in Thailand, and has gradually become a dominant player in the market until today. This example is raised to exhibit a good starting point of strengthening a learning environment, in which creativity and pioneering spirit should be strongly rooted.

Besides an MBA program that NIDA pioneered in the past, it is the first institution in Thailand that offered a doctoral program in Big Data Analytics taught in the Graduate School of Applied Statistics. In additional to cutting-edge graduate programs provided, NIDA encourages students to take examinations of internally-accepted professional certificates, which are highly recognized in many industries. As a result, it has a policy that if any NIDA students can pass such tests and manage to receive those certifications, they can redeem all of examination fees from the school. More than that, in a project feasibility class in Business School, there is a business plan contest which is a stage that encourages MBA students to work collaboratively as a team in thinking creatively to come up with creative business models ever and present to professors who will give feedback and suggestion. That is the class full of joy and creativity. Another activity is Teradata University Network which is a global data analytics community that NIDA has been a partner with. Each year, NIDA students are encouraged to join data mining competition where contestants will be provided with real dataset from a real organization and they have to analyze that data using data mining techniques so that they can present think-out-of-box solutions found from that dataset to that organization who owns the data. So far, it seems that teams who won this competition has always been ones with ability to present ideas of solution derived from hidden sides where very few people were thinking of.

NIDA faculty members work closely with industry and policy makers in government since its creation. They play a critical role in shaping national policies on improving innovation and entrepreneurship ecosystem of the nation. Many of them are also influential journalists who are leading the country’s trend of digital technology, innovation, and entrepreneurial spirit. All of these activities, in addition to teaching and research, are well supported by NIDA and its management because NIDA is aiming to be a thought leader for the nation when new and innovative ideas are needed. Furthermore, through Office of Educational Services, NIDA instructors are encouraged to provide consulting services to help businesses and government agencies solve their complex problems.

It is because NIDA’s research primarily is focused on management and policy, not deep technology, like other universities that have engineering department or medical school. For this key reason there is no internal division like Office of Technology Licensing or policy related to Professor/Student’s best practices for startup yet. But we see possibility that after NIDA Hub is officially founded and run, such an organization and policy within NIDA may be taking place in collaboration with other universities.

NIDA has been well-known for working closely with industry. Some of members in NIDA’s advisory board are CEO or key players in many industries. Recently, NIDA has signed MOU with Grab, number one vehicle-sharing platform in Thailand, so that NIDA can help Grab improve products and services using resources and expertise of the institution while NIDA can also provide practical learning experience to the students who may get a chance to get an internship or work on their term projects or dissertations with Grab since they are studying at NIDA. That may not only provide the students with valuable hands-on working experience but also great job opportunity after graduation.

NIDA was originally established to be a government’s Think Tank for the nation’s social and economic development. Thus, NIDA has been a key player in shaping Thai policies related to economic development endeavors at national, regional, and local levels. NIDA Poll is the first poll in Thailand where it was created particularly to be a tool for enhancing Thai economy using scientific methods. After NIDA Hub is established successfully, NIDA is plaining to launch a new Design Thinking course that every NIDA student across schools can be enrolled and learn how to use concepts of Design Thinking to solve societal problems together with colleagues from other schools. In their final project of the class, they will have to go to real places of problems, such as distant villages or districts, and apply Design Thinking concepts to help solve those problems. This future course is developed to make sure NIDA will be engaging more with development of the nation’s economy at all level by using advanced tools like Design Thinking framework. 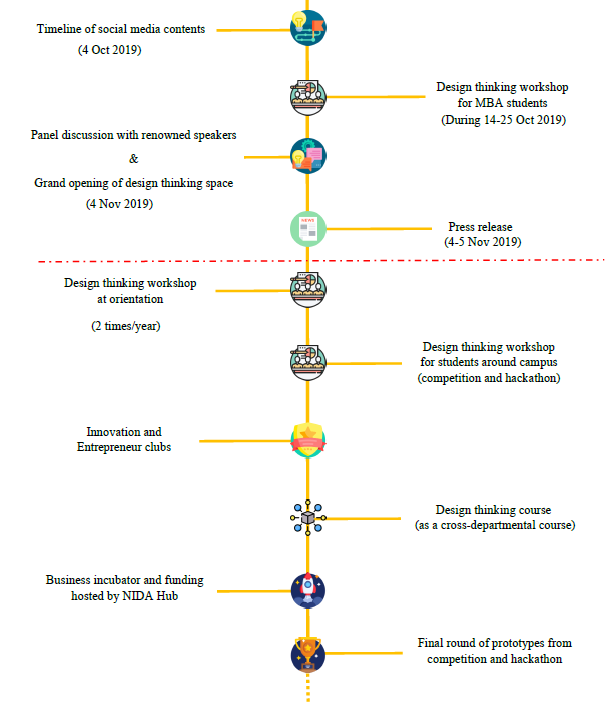 Our team has discussed how we can help both lecturers and students to close the gaps due to COVID-19 consequences, all teaching materials and lecturing methods have to be in an online platform. While easiness of learning online is founded, decreasing in social and emotional well-being is the new problem in NIDA bangkok campus.We performed testing on two prototypes with different ideas. The first prototype is about activities that engage not only students but also lecturers in order to increase alertness of students for preparing to learn, reflection in the class, critical thinking via discussion and leadership competency. Secondly, it is about the grading system that controls student emotions, in off-line and online platforms. After asking faculty champions, it seems that activities for online are favoured and have many potential to make an impact toward the learning experience of students.On the other hand, individual grading systems may be impossible because students have to be measured according to the lecturer point of view. They assume that all students should be able to accomplish their requirement, regardless of their background knowledge and their past capability. As a result, we have set 3 strategic work packages including developing the various games which every game has been categorized into different usage. Some games may help learners be ready for their lesson while others may act as a tool for extracting the new idea. To ensure the lists of games is valid, empathising the student or lectures can get to know their customer journey and how they feel about the game. Last but not least, Scaling it up into the policy of the institute will create a significant change for teaching and lecturing experiences. 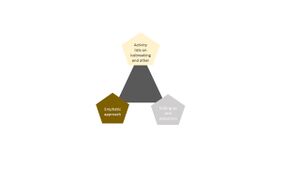