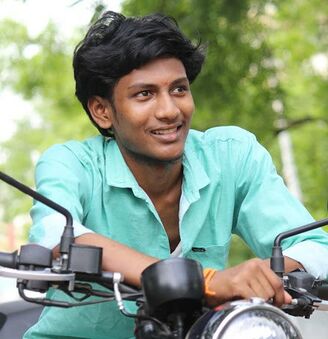 He is\was: Electronic Engineer, and a Fellow, UI Guide.

Challa Hemanth is a Unversity Innovation Fellow from Vasireddy Venkatadri Institute of Technology. He was a 2020 graduate in "Electronics and Communication Engineering" stream. As a student, he organized and participated in many extra curricular activities that enhanced his skills.

His schooling till 5th grade went in a town in Krishna District and the rest in Guntur. His schooling in Guntur had been a great learning for him and also a place where he built his skills, knowledge, and also ever lasting friendships. He then underwent his Intermediate education from a local college nearby and he cracked the IIT Advanced entrance test twice. And got selected for the Indian Naval Academy, Ezhimala, Kerala, India. He consecutively cracked three SSB interviews with SSB Bangalore, NSB Visakhapatnam and SCC Bhopal for Indian Naval Academy, Indian Military and Indian Navy respectively, but had to reject the offers.

He then joined his lovely institute VVIT which turned him into a man ready to hit the society. His journey during his graduation is like a golden period for him. In the first year, he started attending many and hosting a few workshops at IITs. He then pursued Venture Development Diploma Program and served as a student leader for the Northeastern University's Venture Development Center at his Institute in collaboration with Andhra Pradesh State Skill Development Corporation(APSSDC). This program has taught him many key aspects like Business, Customer Validation, Segmentation, Market research, Product analysis, dealing with people, finance and many more. He took up a biz project and really learnt a lot out of it by jumping out to the world and trying out new things. He then served as National Service Scheme(NSS) cadet at his Institute in which he conducted several social service activities on behalf of his Institute. Being an NSS cadet gave him immense pleasure and a way to discover his own self and what he loves to do. He was then introduced to the University Innovation Fellows Program and was declared a fellow in 2018. He attended the Silicon Valley Meetup in 2019 which is a unique experience for him. He experienced several things and also bagged several take aways and memories from the SVM. It inspired him so much and also helped him in several ways and to widen his horizon. The most inspiring take away from his SVM was "Things don't always go the way you want them to. So, start doing whatever you can with the resources you have". Post meetup, he conducted several design thinking workshops to several students including the students of Millennia Institute, Singapore. He also lead the Institute's Innovation Council at his campus which strives to promote Innovation and Entrepreneurship culture. He and his team has hosted the first student hosted Regional Meetup in India and also collaborated with several other Institutes for hosting events like Twente-24 event with the University of Twente UI Fellows, Netherlands. He is a techie who loves developing things hands on. He has found his happiness in programming and built his skills across several languages like Python, Java, Matlab, C Web Technologies and Apex(Salesforce Cloud). He developed many hands-on applications in several domains like Image Processing, Block chain and IOT. He published several technical publications too. He is currently working on Deep Learning Systems and AI Systems. He is now working as a Software Engineer at ValueLabs LLP and is finding new opportunities to change the world.