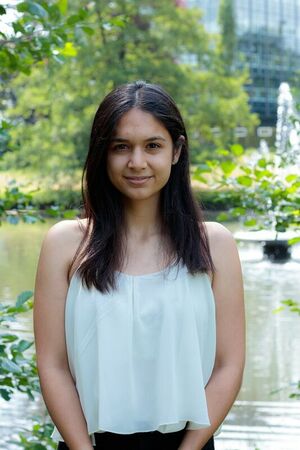 Sevim Aktasis a University Innovation Fellow and student at the University of Twente, the Netherlands. She has a German-Turkish-Dutch background.

Her core believes are:

Sevim wants to show that students achievements go beyond their expectations.

2017 she initiated UT MUN, University of Twente Model United Nations, together with 2 of her fellow students. With a team of 40 students, a simulation of the UN conferences was organized for around 100 delegates. Engineering and behavioral science students have been stimulated to debate about pressing High Tech Human Touch topics.
Besides, she has a been part of a student engineering team, Green Team Twente, building a Hydrogen car. May 2017 they participated in the Shell Eco-Marathon in London and won the European Championship with a consumption of 860 km/l of Hydrogen. As Head of Driving Strategy and Race Coordinator, she was responsible for data acquisition, testings, driving strategy, and coordination during the race.

Summer 2017 she joined the Dream Team, the student team running the design-thinking space, the DesignLab. Here, students, staff, and professionals are stimulated to work together to design for society by means of science. At the same time, she is part of the educational committee of her study programme OKC, organizing student panel meetings to give them the opportunity of providing feedback for quality education. September 2017 she organized the Global Goals Jam, a brainstorming event that takes place in 20 different location all over the world with the goal to find solutions to three preselected Sustainable Development Goals. November 2017 she was launched as a University Innovation Fellow and is pursuing topics related to Entrepreneurship. Besides, the UIF team is cooperating with local institutions, like the local municipality, and the startup incubator Novel-T to provide input from a student perspective. Therby, the overall goal is to benefit students. Since January 2018 she started working on the university's living lab programme, the Living Smart Campus. This is a platform that facilitates students, staff, and professionals to work together on innovative projects that make society smarter and at the same time raise controversion socio-technological dilemmas. Those can then be then evaluated in this research environment. Together with the Scientific Director of the Digital Society Institute and the Managing Director of the DesignLab, the programme was brought to its next level with new features and a new structure.

At the moment, she is candidating for the University Council to represent the voice of students on topics like equal rights for internationals and activism. Furthermore, her goal is to inspire and raise awareness about sustainability and the Sustainable Development Goals of the UN.