"No two people see the world same. You will always have something new to learn from everyone you meet.” 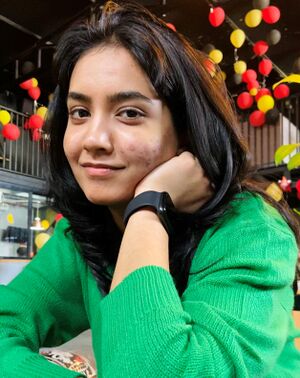 Peeyusha is a girl who resonates deeply with these words. She is a Computer Science Graduate student at San José State University, California and did her undergraduate B.E(CSE) in Vidyavardhaka College of Engineering, India. Born on 30th June 1998 at Davanagere and later moved to the Heritage city Mysore. She loves traveling to different places, exploring and figuring out things on her own, thereby making room for freedom and creativity. She is the kind of person who loves to inspire people and wants to set an example for those who look up to her and to show them all, the results of perseverance, commitment and the power of dreaming bigger. “If there are N ways available for a task, there can be an (N+1)th way and all you have to do is look for it or come up with one” says Peeyusha and is something she abides by. She follows the phrase, “The best way to express yourself is to be truthful" which expresses the importance she places on honesty, integrity, and standing for what she thinks is right.  She belongs to a culture of vibrant colors, a lot of festivals and strongly believes it is important to learn about different cultures, their perspectives while sharing our own. Peeyusha loves to paint and looks at it as a way to express oneself vibrantly and likes interacting with people as she believes there is always room to take away something. She says two is better than one, thereby putting forth her views about a team, a community and the benefits of being a good team player. Her desire to implement what she learns, among her colleagues, fellow mates has always driven her. She works on what good she can give back to the community and the world around. There are a number of ways to influence, inspire and make things better and she says technology is one such way as it can be used wisely to uplift the poor, help the needy and make the world we live, a better place. Her areas of interest are Programming, Machine Learning and Data Analytics.