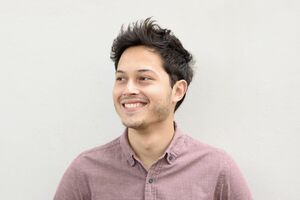 Edo de Wolf is a University Innovation Fellow at the University of Twente in the Netherlands. He is an Interaction Technology student who is 100% convinced that the most impactful things happen when different people can come together and work on a common mission, despite having different values.

Being half Dutch and half Indonesian, he is not sure which culture he identifies with the most, but it is this dilemma which constantly fuels his desire to broaden his perspective and learn from people from all walks of life. Currently coordinating student projects at DesignLab UTwente, Edo has witnessed what can happen when people build new initiatives by embracing their ambitions and the unknown, even if it is a little scary at first. In 2016 he went from saying 'No' to opportunities just to feel safe to saying 'Yes' to the uncomfortable and has not regretted this shift in mindset since.

Edo believes that the best ideas do not have to be complicated - the simplest form might also be the most impactful.

Find out more about my University and cohort's plans here: