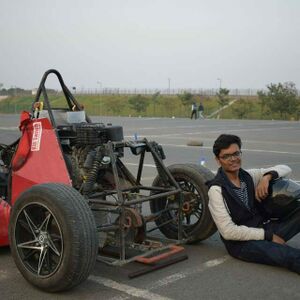 Dhruv Nrupesh Patel is a student of Vidyavardhaka College of Engineering, pursuing B.E in CS. He was born on 21st March, 1998 in Nadiad, Gujarat, India and later moved to Mysore, Karnataka. He finished his schooling in Mysore. He is curious to learn more and more, trying to learn everything he can. He's a creative and workaholic individual who likes innovative and find new ways of helping others. He loves to read non-fiction and value adding books in his spare time, some of his favourites being "Rich Dad Poor Dad" by Robert Kiyosaki, "Attitude is Everything" by Jeff Keller and many more. He is an active member of various clubs in his college like Pixel Hut (Photography club), Magna (Debate club) and Aspera (E Cell) . He had also been a team member in the National level competition of Hybrid Vehicle Challenge where the team reached the final round. He also likes playing basketball. Dhruv likes knowing more about new inventions, upcoming technologies and how things work. He is passionate about taking up projects, learning and researching about them, mostly topics in Artificial Intelligence, IoT, Machine learning etc. Dhruv always had a passion for innovating and implementing something new and he feels that being a University Innovation Fellow will make his passion more stronger. Being a change agent of his college and ensuring that there is interest among the students to learn and develop themselves into better individuals is kind of accomplishment for him as he had always wanted learning in that way. Dhruv believes in a saying by Oliver Wendell Holme,”What lies behind us and what lies before us are tiny matters compared to what lies within us”.

Other UIF from VIDYAVARDHAKA COLLEGE OF ENGINEERING: