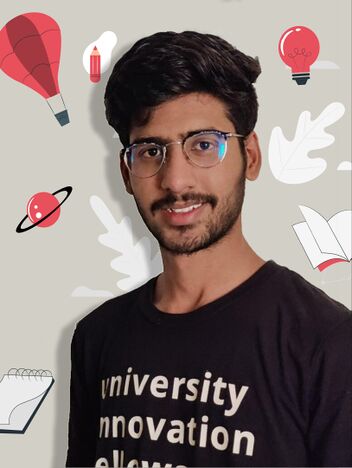 (/'Fellow Fall 2018; born April 7, 2000) is a casual photographer and an inventor. The majority of his work is centred on cutting-edge technology such as IoT and Augmented Reality. His inventions are intended to address societal concerns, such as haptic glasses for the blind, an AR-based helmet to avoid accidents, and a low-cost home automation system for the elderly. He is a tech-obsessed individual who is always on the leading-edge technologies. Aside from his innovations, he also a Front End Developer and UI/UX designer. His areas of expertise include JavaScript, HTML, CSS, React Js, and UX design. He is also a freelance Web developer.

Abhishek Pasupulate graduated from Madanapalle Institute of Technology and Science with a bachelor's degree in Electrical and Electronics Engineering. He was born and raised in the Indian town Madanapalle. Throughout his undergraduate career, he held positions such as Student Coordinator for the Entrepreneurship Development Cell, University Innovation Fellow, and Active NSS member. He also held Eight workshops and provided an internship program on Full Stack Web Development to students through his industry connections. He is also a contributor to an MOU between IIT Delhi EDC and MITS, the first MOU brought by students on his institution. He also helped his college develop a portion of his Institute Website