Shashank Athreya is currently pursuing his Master's in Computer Science at the University of Amsterdam and Vrije Universeteit Amsterdam. 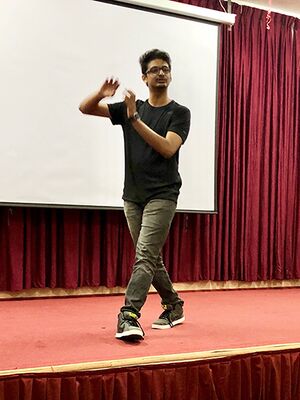 He was born and raised in Mysuru, Karnataka and he has always had a curious mind and an undying spirit of passion towards his work. He often claims to be a daydreamer caught between fiction and reality. He is an extreme reader and spends most of his time learning more about the real world. He enjoys documentaries, biographies and short stories. He loves to interact with others as he believes that new people will provide new perspectives. He thoroughly dislikes giving up. He believes that the mere thought of giving up kills half the work rate and he finds another way of approach to a problem rather than giving up. He is inspired by the quote "TRY TRY TRY until you SUCCEED!" and this keeps him motivated.

He is an extreme reader, experienced debater, a toastmaster; a previous VP-Education of VVCE Toastmasters. He is the youngest Entrepreneurship-leader(E-Leader) of the Entrepreneurship-Cell(E-Cell) of Vidyavardhaka College of Enginnering(VVCE). He was the previous VP-External Affairs and co-founder of the debate club, Magna. He helped around as a full stack web developer and Graphic designer in Open Source Lab of VVCE. He was an ACM member and the previous Vice Chair of the VVCE ACM student chapter. In addition to these, he is the co-founder of an awareness program called SHIKSHAA which is a non-profit program that spreads awareness about child abuse.

From a very young age, Shashank Athreya was interested in the idea of entrepreneurship. He enjoys getting involved in activities and loves to teach. His passion to learn gets him involved in a lot of activities and this allows him to know about everything that is happening around him.