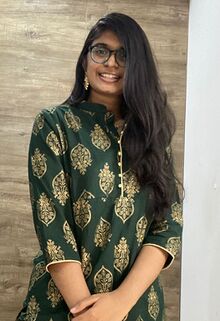 Reddybathuni Jyothirmai was born in Nizamabad on 31st August 2001.Her education took place in lot of schools, although she spent the majority of her time at Chinmaya Vidyalaya in Begumpet.Studying at a trust school like Chinmaya inspired her to be more creative and spiritual by chanting the Bhagavad Gita.Later, she went to Sri Chaitanya Junior College in Guntur to study for the IITs.Despite changing schools, she was able to maintain contact with all of her friends. As a result, she has a strong network. She is currently pursuing her third year in Computer Science Engineering at Vasireddy Venkatadri Institute of Technology.She is also an University Innovation Candidate in her campus.

She is someone who tries to see things in a positive light.If there is something she could do all day, it is watching the clouds, going to beaches or mountains, sitting by the window, and enjoying the rain. You can say she loves to be in nature.She also loves scrolling through memes all day.She procrastinates everything and is afraid of failure at the same time(weird combination..!!). She is someone who is capable of juggling many things at once. She is very organized and planned. Give her any challenge, she is open to doing it but do not ask her to wake up early and exercise.

She enjoys reading fiction and autobiographies, which have helped her imagine a world in her head.The Alchemist and any Sudha Murty book were her favourites among the many books she read. When she was down, the alchemist helped her accept reality.She also enjoys watching travel vlogs and food vlogs.Throughout her education, she won numerous prizes in tennis tournaments and also hosted a variety of school and college events.In school, she was chosen to attend an event in which Piyush Goyal, India's central minister, chose a few students from across the country.She always excelled in various olympiads and scholarship exams.

She is the Human Capital Fellow of MAD (an organisation that works for the welfare of children in shelter homes) in Guntur, which has helped her step outside of her comfort zone and discover what she likes and dislikes. Also an NSS candidate in her college.Every day, she strives to be a better person than the day before.She wishes to pursue a career involving people, such as business management.

PS:Just give her food to make her happy :)