Nesha Jackson is a University Innovation Candidate and an undergraduate student majoring in Medical Technology at Morgan State University (MSU). She is a current senior graduating in May 2018. Her concentrations consist of Medical Microscopy and Urinalysis. Nesha Jackson was originally born in Alamogordo, New Mexico, but she was raised in Maryland. In 2013, she graduated North Point Highschool and began her higher education at Morgan State University. After coming to terms with a clinical birth defect at sixteen, she dedicated her educational progression to science and medicine to create a future where no-one has to experience the birth defect she was born with.

At Morgan State University, Nesha was an intern for the NIH under the Student Research Institute. After this internship she became an ASCEND Scholar for Biomedical Research. Currently she is involved with the National Council of Negro Women. In addition she is a part-time work-study student at the Office of Veterans Engagement. She currently serves as the Treasurer for the Veterans Student Association. In 2015, Nesha competed in her first pageant at her University and won the title of Miss Gold (Vice President) representing the Beta Alpha Chapter of Alpha Phi Alpha Fraternity Incorporated. Her title as Miss Gold was also the Vice President position of the Black and Gold Royal Court. In her spare time she is also a member of KINKS which is a new growing organization on campus dedicated to natural hair and creating a positive union of black women to spread self-love. 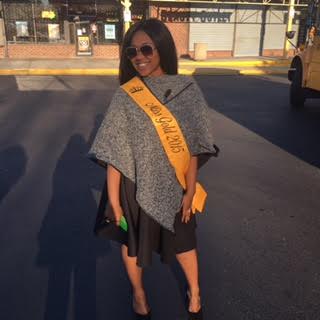