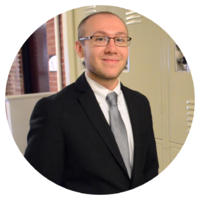 To William, mathematics has described the world with indifferent elegance. He, as a human, cannot hold the weight of indifference. Where mathematics fails in description is where he creates written or visual expression. With the passion of an artist and the thoughts of a writer, he pursues a career in space exploration. The thought to help humanity achieve status as a space fairing civilization hangs on his head.

William is attending York College of Pennsylvania where he is studying mechanical engineering. He has worked in the community and campus on a variety of projects as a member of the Graham Innovation Scholars program at York College. He was accepted into this elite program that focuses on innovation and entrepreneurship as an incoming freshman. Together the group of scholars have founded and run a student business in the beating heart of York City. At its inception William served as the marketing director managing social media accounts and graphic design. Most recently he completed an independent research project on reusable space launch vehicles where he set out to gain a deeper understanding of the emerging field.

For nearly 8 years William has been an amateur graphic designer and for his whole life he has been an artist. The desire felt 40,000 years ago from cave dwellers to draw on rock walls remains as an everlasting itch in William's fingers. It only makes sense he is helping to design a makerspace with walls covered in white boards. A picture is worth a thousand words and when he becomes inspired by his imagination and sees wonder, he attempts to write those thousands of words as poems, stories, and random strings of thought.