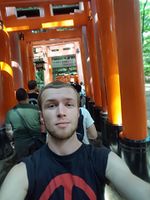 University Innovation Fellow Ben Hinkel is a junior undersgraduate student at York College of Pennsylvania (YCP). He is currently pursuing a major in International Relations with a minor in Intelligence Analysis. Born and raised in the rural area of Ashland, Pennsylvania, his interest in International Relations was peaked through a student exchange program he participated in with his school's sister school in Bremerhaven, Germany.

Ben is very involved at YCP. He is a member of the Graham Scholars program which focuses on innovation on the YCP campus. Furthermore, he is a memeber of the track team, where he and his teammates hold a record in the 4x800 meter relay. While on campus, Ben is also a Resident Assisstant and a First Year Seminar Fellow, where he aids freshmen with their transition into college. Finally, Ben is a member of Alpha Chi, a prestigious national organization that recognizes academic excellence.

Drawing from a diverse array of interests, Ben enjoys making connections with people to help them solve their problems. He is devoted to solving world-wide problems, with his passion only growing with each new country he visits, especially with his most recent trip to Japan. In the future, Ben plans to work for the United Nations, helping to create solutions to the world's most pressing issues.