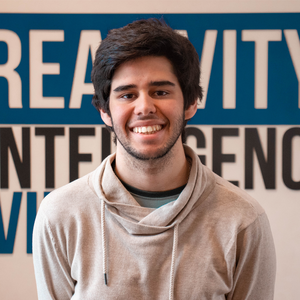 (UM). Rodrigo was born in Maldonado, and he lived there until he moved to Montevideo to attend college. Always being curious about how machines, systems, society and the world worked, he started his career in 2017. In that process, he got to know a lot of people who contributed to his formation and personality until today. Some of them introduced him to University Innovation Fellows.

At Universidad de Montevideo, Rodrigo takes part in activities such as the Changemaker club, the volleyball team, and he is also an assistant teacher in subjects like Robotics or Coding. During his free time, he likes to help new students whenever he can and think about new projects for the university.

Since he was very young, Rodrigo was very keen on sports, music, technology, maths and making people laugh. He plays the drums since he was 6 years old, and listens to music for about three hours a day. He is always thinking of crazy ideas to make the world a better place and willing to accept new challenges, although he has a very critical thinking sense. He believes that in order to have a good idea you have to think of lots of bad ideas first, but he hopes one of them one day will make a difference for his surroundings, the society, or maybe the world, who knows?