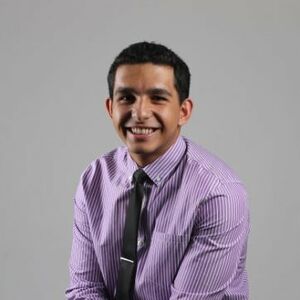 Pouya Rad is a University Innovation Fellow and an undergraduate student at the University of Portland (UP) in Portland, Oregon. Pouya is majoring in Computer Science and is a member of the Entrepreneur Scholars (E-Scholars) program on campus and is also studying for an Entrepreneurship & Innovation Management minor. Additionally, he is a Resident Assistant (RA) in one of his university’s residence halls, Shipstad Hall.

Rad is originally from Vancouver, Washington (nope, not Canada), but lived in Portland during his elementary school days. While currently at UP, Pouya originally began his undergraduate career at the University of Washington in Seattle, where he finished his Freshman year. He transferred to UP to pursue his goal of majoring in Computer Science and to also continue his martial arts training and be closer to family. While at UW, he took a course titled “Intro to Human Centered Design & Engineering”, where he learned a number of design thinking techniques such as UI/UX, 10x10 thinking, rapid prototyping (sprints), and more.

Originally, Rad knew he wanted to pursue entrepreneurship in some fashion at UW and later planned to get a minor at UP. During a meeting with a business school advisor about getting the minor, he was recommended to apply for E-Scholars. While part of the E-Scholars program at UP, Pouya was exposed to UIF by another classmate in the program and was recommended to apply by his instructor. Knowing that these two programs together could create a very strong foundation in entrepreneurship and innovation, Rad applied and was accepted in Spring of 2018 as part of the UP Leadership Circle for that season.

During the summer of 2017, Pouya worked as an intern at Hewlett-Packard Inc., where he applied his Computer Science skills on a project that involved robotics and scripting. During his internship, he was brought in on innovation meetings with his team and supervisors and submitted three invention disclosures for novel innovations. Though none were accepted to be patented, Rad was excited to continue cultivating this mindset of innovation in his work.

Finally, Pouya’s life isn’t just code and design thinking. Now a first-degree black belt, Rad has been involved in the martial arts for over 10 years studying the arts of Shotokan Karate, Japanese Ju-Jitsu, and Ryukyu Kobudo (Okinawan Weapons). In Fall of 2016, Rad applied to begin the first ever martial arts club at the University of Portland, but was unfortunately rejected. He’s well known for being a large movie buff, with some of his favorites being Interstellar and The Godfather, and has recently begun appreciating music as a physical medium by collecting vinyl records.