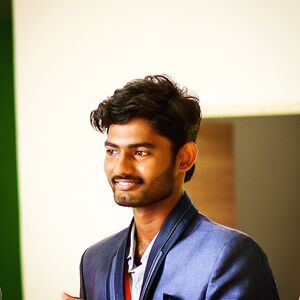 Pavan Kumar Gandi was born in Visakhapatnam(Andhra Pradesh, India) on 11th June 1999. He is a University Innovation Fellow and an undergraduate student pursuing his Mechanical Engineering at Aditya Institute of Technology And Management (AITAM), Srikakulam. He completed his secondary education in one of the prestigious institutions in the country, Jawahar Navodaya Vidyalaya(J.N.V). In his Life, Navodaya imparts  an over-lasting impact on him due to its perfect Education system where students are exposed to academic and non-academic activities(sports & games, arts, music. etc) to recreate themselves. He is always confident and well determined. He doesn’t let the grass grow under his feet and always get straight to  the point.

He got inspired by Great people's Ideology and tries to acquire those by following them. He read more number of books other than academic books.  His favourite book is "RICH DAD POOR DAD"  Written by Robert Kiyosaki which educates about financial maturity, Business & Entrepreneurship. He is having good Leadership skills and he believes that "Leadership is the capacity to translate vision into reality". He likes to do what the rest of the world didn't do. He believed that "Thoughts become Things" i.e. Our Success depends on the thoughts we generate from our mind. He plays games like cricket, volleyball and Basketball pretty well and he used to go to ground daily to minimize his stress levels by playing Games. He likes to spend his leisure time with his friends who are crazy in their own way and he likes it so much. He likes challenges and accepts the problems into his Life as challenges. Attended for Silicon Valley Meet-up(S.V.M.)-2019 at California, U.S.A. At his college, he works as a change agent to develop campus's Innovation and Entrepreneurship Environment. He initiated two clubs for students, one club for developing technical skills and other is for enhancing Creative & Innovative skills through inter-disciplinary activities club.

So, He believes that  "He has the ability to change and rewrite the Fate of the World" because If you believe, You can do  anything and everything.

His motto is "LET'S NOT WAIT FOR THE CHANGE, LET'S BE THE CHANGE".