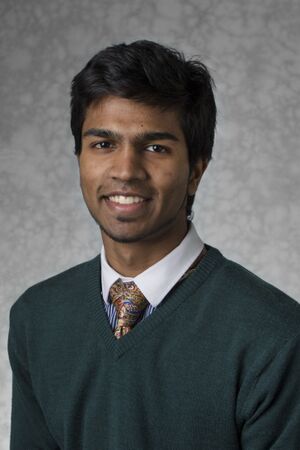 When Nikhil was four, he thought he would be a pilot. He then wanted to be his uncle, the cool one who was always relaxed, who decided his own terms and had an artistic job. Later, his past was mixed with aspirations of architecture, artistry, writing, engineering, until Nikhil reaches the present where he is perplexed as to what he wants to be. It creases his brow to think that he cannot be it all, but then he remembers who he is and it brings a little peace and clarity. The person who he is – is kind, gentle, caring. He is one who could spend the entire day contemplating his imagined future or gazing intently into something as infinite as the stars or as delicate as a cell. He would rather spend a night painting than sleeping, and his most valuable possessions are his friends and the pictures he sees when he closes his eyes. Today the world finds Nikhil studying physics as a Junior at Grand Valley, but tomorrow Nikhil might find the world to be too small and might fly to the horizon to see what’s beyond. Nikhil lives by many principles, but his most cherished one is bound to remain the same forever – his thirst for change.

Nikhil believes that life is a story; aware that any good story conceals its oceans within its deserts, he waits in passionate anticipation for the adventures on the next page.