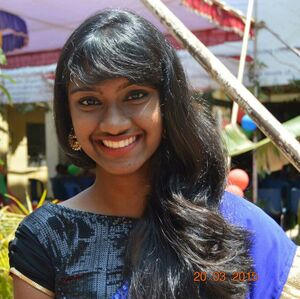 Magnoliajr.jpg
She is the Chairman of IEEE Anantapur Sub-section. She was awarded “Prathibha Puraskaar” by the Chief Minister of Andhra Pradesh in 2015 for her academic excellence. She also stood first in the “Engineering Common Entrance Test”, ECET a state level Engineering entrance test conducted by Andhra Pradesh Government.
She organised and led a creative & innovative political movement called “Samaikyandhra Rotte” (means The Bread of United Andhra Pradesh, a local tradition) in 2014 against the division of the Andhra Pradesh(a province of India) which became a state wide sensation and attracted the then Policy makers. She also organised a Shouting competition called "ROAR" using the sound level meter on different social issues.
Not only the academic excellence, she shines in the “sports” field too. Stood number one in 100 meters sprint in a state level competition. She did a project in web development called “Nellore Health Advisory” which lists all the hospitals and doctors of Nellore city.
She is passionate about creating a global platform of intellectuals to solve and address the risingA.I(Artificial Intelligence).

If you are interested in contacting Magnolia she can be contacted at  LinkedIn on https://www.linkedin.com/in/magnoliajr18 or by email magnoliajr18@gmail.com