Jesse Lundervold is a University Innovation Fellow and an undergraduate studying chemistry and studio art at William Jewell College (WJC). Jesse is originally from rural Missouri and has met many creative and influential people at her small, liberal arts college in a suburb of Kansas City. Working closely with other Fellows on campus, she learned about the variety of opportunities available through the UIF program. Jesse is eager and excited to be exposed to such a rich environment of innovators as a Fellow at WJC. 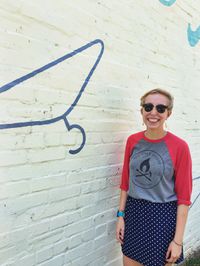 While on campus, Jesse is involved in the Nonprofit Leadership Association, Zeta Tau Alpha, the WJC chapter of the American Chemical Society, Residence Life, and is an editor for the campus newspaper, The Hilltop Monitor.

Jesse loves being outdoors whenever she can. She has completed both the North Carolina Outward Bound School in Everglades National Park and has worked as a member of the Trails crew in Rocky Mountain National Park. Jesse hopes that through her time as a Fellow, she can apply innovative techniques and her chemistry background to help promote conservation and environmental awareness.