From University Innovation Fellows
(Redirected from William Hyde)
Jump to navigation Jump to search
Will is a junior at William Jewell College in Kansas City, Missouri. He is working towards three majors in 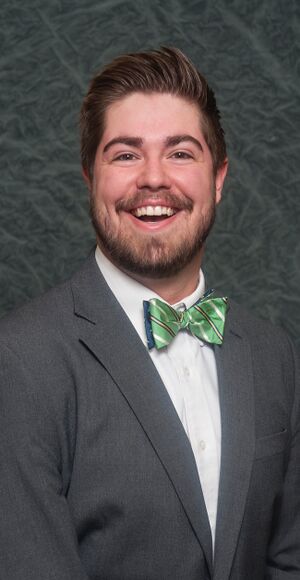 and Applied Critical Thought. In addition to his majors, he is involved with Pryor Leadership Program which is run out of the colleges Non-Profit center. Will is a passionate advocate for social justice issues, which is the reason for his involvement with the Black Student Association, QUILTBAG, and a reason he became a Student Senator. This passion is also why he intends to pursue a dual MBA/JD program after undergrad.

Will’s craving to create real change on campus saw him become a Cardinal Blazer and First-Year mentor to help recruit new students. He joined the Jewellverse Advisory Board to help influence tech policy and implementation of campus. He is now a University Innovation Fellow candidate with hopes to learn the skills to empower the rest of the student body to partake in lasting change.

While very involved, Will enjoys playing and watching tennis, talking, tech, listening to NPR, and reading about politics. He is from southwest Missouri, has two sisters, and a dog, Venice, that rules the house. He would be glad to help you with anything so feel free to contact him by Facebook or email at williamreillyhyde@gmail.com.