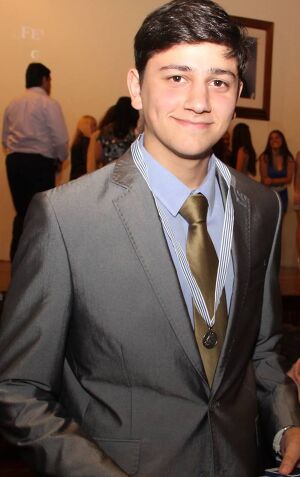 Guillermo Stock is a University Innovation Fellows training candidate and an Industrial Engineering student at Universidad de Montevideo (UM) in Uruguay. He was born in the same city, which is the capital of that small country. Nowadays, he is volunteer at the ‘’Compartida de Matemática’’, a 25 year old foundation which tries to spread the love for math knowledge to all young students in Uruguay and mix knowledge with creativity to form enterprising people. Also, he works as a teaching assistant in Physics at the UM and Math teacher at several primary schools.

Since elementary school, he excelled in the area of ​​mathematics, so he began training, at the age of 13, for the National Mathematics Olympiad. Between the ages of 13 and 18, he qualified to dozens of international Olympiads, obtaining different honorable diplomas due to his good performance. In his last year of high school, he was crowned champion of the National Mathematics Olympiad.

On the other hand, in 2007 he joined the group of Hungarian folk dance in the Hungarian Home of Uruguay . He participated in 2008, 2010, 2012,2014 of the South American Festival of Hungarian Folk Dance representing his country. Furthermore, in his free time he enjoys playing the guitar.

His knowledge of the exact sciences in conjunction with his passion for music and the cultures he has known through his travels around the world representing Uruguay in various ways make him a highly empathetic, extroverted and respectful person, always ready to help young students overcome obstacles and provide both academic and motivational support. On his campus, he wants all the different degrees to become closer and help the youngest students to get ahead and motivate their creativity, fostering spaces for dialogue, as well as other integration projects.