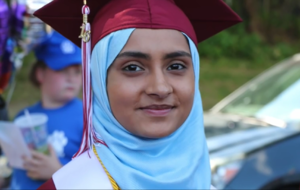 Farheen is a junior at Hartwick College, majoring in Computer Science and Biology with pre-med track. She was born in Pakistan, but migrated to United States in 2012 at the age of 14. Her high school offered many opportunities, but not being able to speak English, she never really understood the benefits of those offers. Since she was not involved in any extracurricular activities, Farheen decided to take as many courses as possible and kind of became a "studyholic" and stayed like that until her senior year, when she was asked by my New Visions Health teacher to participate in Lemelson-MIT InvenTeam. She thought if a teacher is believing in her, then there must be something special about her that she has still not recognized, so she decided to participate as the Technical Lead and helped her team members create an exoskeleton hand whose purpose was to aid patients with stroke, who have paralysis or paresis of hands and enhance their ability to use their hands. Without even realizing, she slowly took over the team and was acting as the Administrative Lead. Her instructor saw this and said she would make a good leader, and signed her up as the co-leader of the team. Her team presented their product at Lemelson-MIT EurekaFest 2016, and it was a success.
When she came to Hartwick, she wanted to do something that would involve the leadership skills she had learned in high school. One of her professors, told her about UIF and said she would be good candidate. Once again, she was in the position where a teacher/professor saw something in her. So, just trusting her experience with L-MIT InvenTeam, she decided to join UIF and was accepted as a candidate.