Dalton J. Nelson is an undergraduate student at William Jewell College studying mathematics and pre-biomedical engineering while minoring in physics. Dalton was born in Salina, Kansas, but shortly after his family relocated to the Kansas City, Missouri metropolitan area where he stayed until he was through high school. Dalton now lives in Liberty, Missouri where William Jewell College is located. 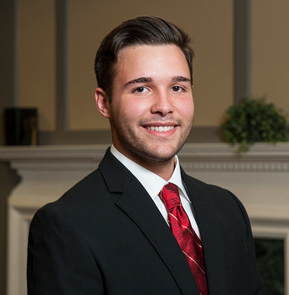 At William Jewell, Dalton stays very involved due to his belief that he should take advantage of any and all opportunities presented to him. Dalton is a first-year residential assistant, a member of the Fraternity of Phi Gamma Delta, an on-campus tutor,  a member of the society of physics students club, a member of the KME math club, and works with both the Office of Advancement and the Office of Admissions. He also spent a summer working with the Pillsbury Department of Physics as a research assistant.

Dalton is passionate about learning and believes that the knowledge and skills he develops throughout his life should be shared, in any means necessary, with everyone. He found himself fully invested in the belief of sharing knowledge in the summer of 2016 as he witnessed happiness resonate through the children of Marfa, Texas when he and a few of his professors taught basics of physics and engineering in one of the most underprivileged communities in the United States.

With aspirations of being in the medical field and fiery love for mathematics, Dalton decided late in high school that biomedical engineering was what he wanted to pursue in life. More specifically, he would love nothing more than to help manufacture artificial tissue and, with high hopes, eventually create organs custom for those in need.

He is fueled by his love for his friends, family, and his German Shepherd, Bandit. When it is all said and done, Dalton wishes to make the largest, most positive impact he can while sharing laughter and fun with those around him.