The following is based off the RISE group from Rose-Hulman Institute for Technology. 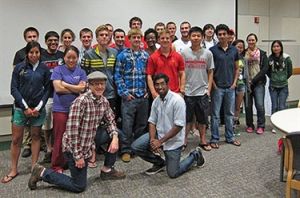 RISE! is a group started at Rose-Hulman Institute of Technology with the mission “to raise awareness of innovation through entrepreneurship and empower students to make their ideas a reality by giving them the tools to start, refine, and realize the visions that will shape tomorrow!” With the lack of desire to find entrepreneurship, the founders set off to start a club that would “RISE” awareness and put forth the action of the entrepreneur mindset by bringing awareness and culture to their campus. The University is well-known for placing engineers into Fortune 500 companies, but not many of them are known for great start-ups on the entrepreneurial-side of the engineering world. Because of this, the club was formed as Rose Innovative Student Entrepreneurs also, known as RISE!

The goal of RISE! is to create a group with the ability to accomplish tasks quickly, as well as develop a network to explore the start-up world and have a great way to gather resources for other fellow “RISE” members in the years to come. The need was formed after feelers went out and over 60 students responded right away. The need was there and students were identified on campus that did in fact want an entrepreneurship group to help bounce around ideas and also create a cohesive group. The idea was to show a different path for students who wanted to take a more innovative route rather than graduating and working for a  big company.

Academic Permission (Steps to be a Club)

RISE!'s main advisor is a retired professor that connected the main leaders to active professors on campus. Because of these relationships, they have held great communication with faculty and alumni.  Alumni help with interviews and pitching events, including brainstorming parties. The biggest event Alumni partake in is the Startup! Seminar, mainly as speakers for the event, but also to show ways innovation has helped in their own career paths.

In terms of leadership, qualities that have been discussed for this organization are to find "go-getters" that take initiative as well as planners that pay close attention to detail. These types of people are going to further the organization and strive to make it a success.

RISE! has launched with the help of fliers, emails and follow-up emails, the perfect amount of persistance (without being annoying) and good conversations that peak others interests. They have created booths to get their clubs idea and vision out into the eyes of their campus. Once you put the seed into the mind of others, advertising can become viral.

Lessons Learned and Tips for Others