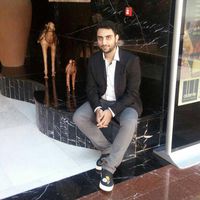 Joe Khattar is a student taking the undergraduate Information Technology course at Ajman University (AU). His passion lies with innovative technological ideas which range from and include electric cars, computer systems, and physical electronics. Basically, technological advances which reshape the way we live our lives.

Originally Lebanese, Joe was born in the UAE where he spent his whole academic as well as adult life. And now, he is pursuing his passion in University.

In his youth, Joe was, and still is, the most tech literate amongst his family and friends. They would often turn to him for guidance with tech issues. During that period of time, he was particularly attracted and absorbed by technology and would often be caught day-dreaming in his own world. It was because at the time, he was not in an environment that cultivated and nourished innovative thinking and constant change. However, that did not stop or even discourage him from pursuing that dream. Fortunately for him, his perseverance and determination paid off; he was accepted into the internationally recognized AU.

Immediately after joining his preferred course, he flourished. To elaborate, the ideas and concepts that he day-dreamed about in his youth started to manifest themselves in the real world. To put it in concrete terms, he had a very strong work ethic in his first year. Consequently, he was appointed to the Dean’s list for being having one of the best academic performances within the college of IT.

When it comes to entrepreneurship, he loves to share his knowledge on the subject to interested minds. At the same time, he loves to learn about and follow the example of other successful entrepreneurs. When it comes to entrepreneurs whom Joe thinks are inspirational, some names stand out. Some of these big names are: Elon Musk, Steve Jobs, Gordon Moore, and Bill Gates. One common characteristic these visionaries share is their involvement in technological innovation, the topic that Joe is uncontrollably drawn by.
Lastly, when it comes to his future goals, Joe has a very simple and brief objective: he wants to be listed as one of the great visionaries that people look to for inspiration.