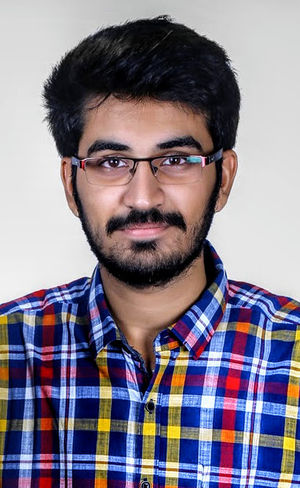 Srikar Kashyap Pulipaka , popularly known as Wiki or Mr.Wikipedia across the campus, is a senior year Computer Science undergraduate student at K L University, India. Although hailing from Hyderabad, he has traveled extensively and got to live in 5 cities. Srikar moved to Vijayawada in 2014 to pursue Engineering at K L University and resides there as of this writing. Srikar is a strong advocate of Open Education and Knowledge, partly due to his association with the Wikipedia Movement. He believes Experiential learning and Design Thinking are the way forward for Higher Education in the World.

Srikar Kashyap got introduced to student activities early in his first year and has since worked extensively to organize various co-curricular and extra-curricular programs at his University. He currently serves as the Associate President of FOCUS (Forum of Upcoming Computer Scholars), the student body of Computer Science. He is also a founding member of the University Open Source Group and has founded the K L University Wiki, currently in Beta phase. Srikar is a fervent advocate of Open Source technologies and has introduced various FOSS technologies like Git, GitHub, MediaWiki to the populace by organizing an array of workshops and technical talks.

In addition to University life, Srikar is a veteran Wikipedia contributor, having made his first edit back in 2011. He has over 25,000 contributions to various articles spread across four languages and multiple domains. He primarily writes on Military, Economic and Entertainment affairs and is one of the senior-most Wikipedia Military Historians from India. He has previously served as an intern at Wikimedia India, the national chapter of Wikimedia Foundation. He is the Co-founder of MediaWiki Club, India, a technical club that aims to bridge the technological gap that exists in the Wikipedia Contributor base of India.

Srikar has been a recipient of many awards and accomplishments. He was the Featured Wikimedian of the Month in June 2013 at a record age of 16. In addition, he secured an All India Rank (AIR) of 40 with a percentile of 99.7 at the National Creative Aptitude Test (NCAT) 2016. Srikar has received multiple prizes in Technical Competitions, the most notable being Winner Team (Communications Vertical) at the UC Berkeley Open Innovation Hackathon India in August 2017. He is interested in transforming the Education curriculum of the undergraduates, especially freshmen so as to keep up with the rapid pace of the current world and make a mark for themselves.