Saba Nafees is currently pursuing a PhD with research focused in mathematical biology at Texas Tech University. She graduated in May of 2014 with a Bachelor's in Mathematics with Highest Honors. As an undergraduate, she conducted research with Dr. Sean Rice, a theoretical evolutionary biologist, through the TTU Howard Hughes Medical Institute Program. In her undergrad, she founded multiple student organizations such as the first ever Define American chapter inspired by Jose Antonio Vargas to encourage DACAmented youth in West Texas. Through her civic engagement activities, she has spoken at the TEDx stage, has served as an E3! Ambassador for the White House Initiative on Asian Americans & Pacific Islanders, has spoken as a panelist at the WHIAAPI Summit in Washington D.C., has appeared twice on MSNBC Live, and has led an unforgettable journey as a Dream Rider tour with fellow young minority leaders throughout eastern and southern United States. She is passionate about entrepreneurship at Tech and abroad, helping lead the Texas Tech Innovation Mentorship & Entrepreneurship program and implementing a business plan for Tibetan refugees in India and Nepal. During the past school year, she served as the SGA VP for Graduate Affairs at TTU and continues to serve as a One Young World Ambassador. 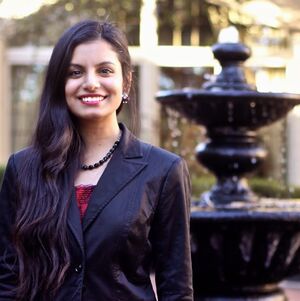