From University Innovation Fellows
Jump to navigation Jump to search
Pedro Juan Isaza is an insightful Colombian student who majors in both Business and Law at Universidad de los Andes. Born in 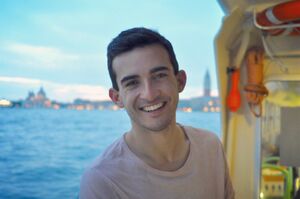 Pedro Juan Isaza.jpg
November 1996, he is the eldest of two siblings. In 2015 he graduated from Los Nogales school, where he earned the “Orgullo Nogalista” distinction for his service to the community. Later on, just as Isaza was wrapping up his fourth semester at the university, he was exposed to the University Innovation Fellows program, by which he was completely blown away. He is now carrying out his training to become a fellow.

Throughout his academic career, Isaza excelled in numerous leadership positions, including President of the Student Council in high school and Entrepreneurship Director at the university’s Student Council. This, precisely, shines a light towards one of his major passions: entrepreneurship. He has also been involved in various entrepreneurship projects of his own, such as Innova, a student-life activities planner, and Despega Colombia, a country-wide entrepreneurship accelerator. Other projects, like Casconfiable did not enjoy the same level success, but they remain close to his heart for what they taught him.

Regarding his personal life, Isaza enjoy spending time with my friends and family. With the latter he enjoys lazy Sunday breakfasts and the occasional Friday night movie, which always prove to be a nice break from the routine! As for his friends, an outdoors activity is the top choice: everything from a casual hike in Bogotá's Cerros Orientales to an intense road bike challenge up to the Sisga Reserve, can be the best way to spend the weekends.