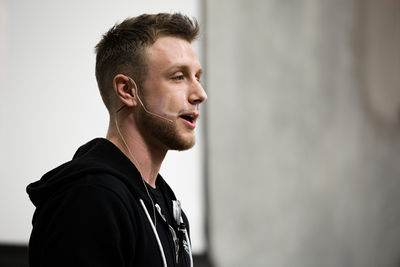 Kurt Dawiec is a University Innovation Fellow at the City College of New York. Kurt is a sophomore who wishes to graduate with a B.S in Physics. Outside of his passion for science and learning, Kurt enjoys studying investment and entrepreneurship. Kurt grew up in Brooklyn, New york. His exposure to the bustling business districts and rapidly developing neighborhoods of NYC gave Kurt a drive to become a major influence in the US economy. After his first year at City College, kurt became motivated to change his campus and bring more support to the student body. After one conversation with a friend about the program, Kurt decided to start training to be a University Innovation Fellow.

At CCNY, Kurt is an active catalyst for student activity. He has served as a Senator for the Undergraduate Student Government since his first semester. He is the Vice president of the Entrepreneurship Student Club which has organized yearly TEDx talks, professional development workshops, and networking nighs usong nothing but student brainpower. His involvement with the SEEK program at City College has allowed him to speak to incoming freshman about the importance of campus involvement. Kurt is also a brother of the Tau Kappa Epsilon fraternity and has helped raised over $4,000 for charitable causes this past semester as well as hosted several worshops on the topics of; resume building, digital marketing, investement portfolios and financial literacy. Kurt likes to be a mentor figure to as many people as possible. He offers friendship and guidance to incoming SEEK freshman as well as candidates for his fraternity.

Coming from a humble background, Kurt had always been inspired to become an advocate for the under privileged. His participation in the program has allowed him to discover just how little public universities have. Within the road between his extracurricular interests and the school he attends, there is a disconnect. Kurt has been actively using his voice to bring about change for City College.