Jack is a University Innovation Fellow and an undergraduate student studying 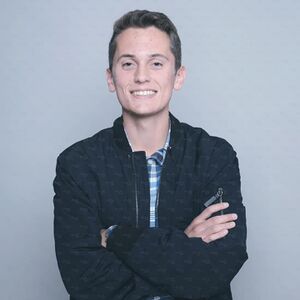 At William Jewell, he is a member of the Men’s Golf Team, the Fraternity of Phi Gamma Delta, Student Senate, the Alpha Lambda Delta Honors Society, is Vice President of the Delta Mu Delta Business Honors Society, a member of the Pi Sigma Alpha Political Science Honors Society, and the College Union Activities Leadership Board. Off campus, Jack is on the Membership Committee for American Public Square, a non-profit dedicated to promoting civil discourse in America’s communities. Jack is also a part of the Kansas City University Venture Fund program, where he is attempting to learn about the American economy and entrepreneurship through the lens of venture capital financing. Last summer, he worked as an intern at the Clay County Prosecutor’s Office, where he helped with a community project that fights against scams and other forms of exploitation.

Jack’s main hobbies include playing golf, watching sports, spending time with friends, and reading about current events in the Economist magazine or the Wall Street Journal. Along with two of his close friends, Jack transformed his passion into change-making when he co-founded a campus organization last year called “Cardinal Union” to combat hostile political discourse at William Jewell. He currently serves as the President of Cardinal Union and hopes to continue to improve civility and dialogue among his fellow students.

Currently, Jack is conducting an undergraduate research project on welfare economics and high rates of child poverty. He attended the London School of Economics and Political Science last summer, where he studied public economics and conducted field research in London for a comparative case study. While he does not yet know exactly where he wishes to wind up in his future career, he hopes to be in a position to alleviate entrenched poverty in the United States. Jack sees this as the biggest issue facing America, and he wants to do whatever he can to make the policy changes that are needed in order to fix the problem.