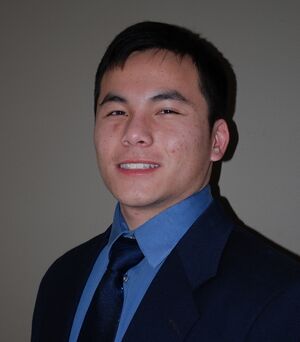 Huy (Huey) Lam is a junior biomedical engineering major at Washington University and the president and founder of Engineering World Health (EWH), a student group that designs low cost medical devices for the developing world. As a freshman, his team designed BiliNova, a device that could treat neonatal jaundice more cheaply and comfortably, and won the Engineering World Health design challenge. His team had over $10,000 in winnings from various competitions. The next two years, he formed Washington University’s first official EWH chapter, grew its membership from 5 members to 50 members, and increased the innovation rate from 1 device a year to 3 devices a year. The chapter has since then won the EWH design challenge again and placed higher in entrepreneurial competitions.

Aside from academics, he enjoys spending time with his girlfriend, cooking food for his friends, playing guitar and piano, swimming, and long boarding with a longboard he built around campus. In high school, he was the captain of the varsity swim team and ran the summer swim team band which performed pop songs at the end of every swim season. At home, he hosts the family winter holidays band with his brothers.

His favorite quote comes from Steven Job’s 2005 commencement speech at Stanford University. "Believing that the dots will connect down the road will give you the confidence to follow your heart", has stuck with him ever since he enrolled at Washington University the following fall. It allows him to tread confidently in everything he does, continually achieve and set new goals, endure trying times, and bounce back from failure.