Henry Cyprien Fabre is a keen economist and entrepreneur studying at Skidmore College. Born in Venezuela, educated in the United 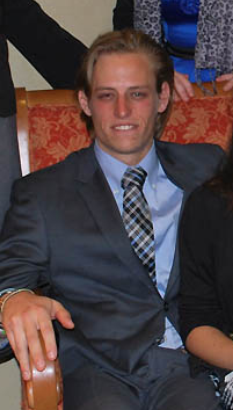 Kingdom he hails from an Anglo-Swiss background. Having travelled far and wide from the heart of the Belizean jungle to the wild plains of Africa and deep “down-under,” he has gleaned knowledge and culture from many corners of the world. As a result he has become passionate about solving global issues. This enduring interest won him second place in the New York State Business Competition in 2015 for his solar power internet enrichment centers in South Africa (Klicka). His next initiative on a long list of ambitions is to tackle water shortage in the Caribbean and to create solar power desalination on the island of Antigua. His introduction to engineering comes from the New York Executive Clean Energy program and has inspired him to pursue clean-tech solutions, which is a subject close to his heart.

He is passionate about sports and earned a number of titles in the British National Foil competition in his teens. He has since taken up kite surfing and competitive sailing in classic boat regattas. During the winter months he practices telemark skiing in the Adirondacks. He became a dive master when he was fifteen and explores the oceans from above and below. In his spare time he enjoys searching for antiques and amongst his collection are a series of 1930s travel posters and vintage Zippos. Having experienced a number of extreme sports including canyons swings and paragliding, he is now keen to explore the possibility of acquiring a private pilot’s license.