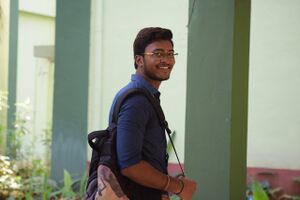 Bhanu Kowshik is a University Innovation Fellow Candidate and an undergraduate student pursuing his final year of Bachelor of Technology degree in the stream of Electronics and Communication Engineering at K L University, India. He is a passionate learner, explorer and self-directed with the ability to learn and adapt. Hailing from the city of Guntur, Andhra Pradesh he got to live in 4 cities and never restricted himself within the stereotypic boundaries both physically and mentally. Being an amateur from his childhood he has been an active part of many curricular, co-curricular and extracurricular activities winning many competitions, the most notable being the Winning team of Ayudh International youth summit heald at Amritha Vishwa Vidhya petam, Kerala in December 2018 and the Semifinalist of Master Orator Championship by Toastmasters International District 98.

Bhanu got involved in the University student activities early in his second year and has been extensively working for them since then. He is a Lead Organizer and publicity lead of TEDxKLU, the first of it's kind in and around Amaravati and TEDxKLUSalon.He served the University's I&E Cell being a major part of it and worked as a Corporate collaborations coordinator for university's Techno Managment fest - Samyak. Apart from his student life, he worked as a Vision Guardian for a non-profit named Make A Difference, which is one of India's top 10 greatest places to work for, according to a survey. He worked there as an Academic Support Volunteer for the city of Guntur. A MADster is what he calls himself with a lot of pride.Apart from his team management and Leadership skills he also pocess immence technical literacy and had written 3 technical papers based on computer networks in which 1 got published in IEEE explore and one in IEEE journal.

Bhanu Kowshik believes that the world is running a number race which has to be transformed by parallelly keeping up the pace with the current world. He is deeply influenced by the notions of Steve Jobs " Think Different " and Dr. A P J Abdul Kalam " Dream Big ". He consistently works on Adding life to his days instead of Adding days to his life.