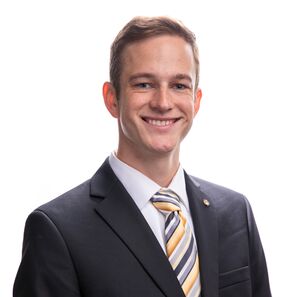 Adam Vogel is a junior studying mechanical engineering at Southern Illinois University, Carbondale. In the winter of 2017, he started a rocket team specializing in high altitude autonomous payload delivery. In its first semester, his team earned second place in a national competition. He hopes to work in upper-level supply chain for an aerospace company. When he isn't studying or building rockets, he can be found outdoors. As an Eagle Scout, avid fisherman, Ironman trainee, and hiking enthusiast, he never turns down an outdoor adventure. Adam has served as the Service and Social Justice Chair at his Newman Center, Deputy Grand Knight in his Knights of Columbus chapter, Senator in Engineering Student Council, President of the Rocketeers of Southern Illinois, Vice President of the Dawg Pound, and President of the Saluki Triathletes.