Eric is a former University Innovation Fellow who graduated from Missouri University of Science and Technology in May 2016. During his last semester, he and his cohort developed the curriculum for Ignite Innovation, a free workshop that kickstarted freshmen students' college careers with exposure to the entrepreneur’s mindset, machine and electronics shop training, and connections to campus leaders in the Missouri S&T innovation environment. The students learned design thinking methodology, business models, undergraduate research opportunities, and were introduced to the rich student design team ecosystem on which S&T places great pride. Finally, the course offered safety training for students interested in joining design teams - a credit that funneled directly into satisfying experiential learning requirements required for graduation from S&T. 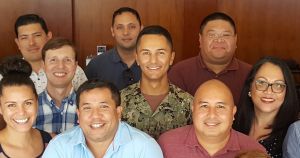 After graduating, Eric was commissioned as an officer in the U.S. Navy Civil Engineer Corps. He was assigned to Naval Facilities Engineering Command, Marianas as a Construction Manager for the Public Works Department of Naval Base Guam where he has managed over $200M in military construction projects. His customers included Naval Hospital Guam, Submarine Squadron 15, the Guam Army National Guard and many others. He currently holds the rank of Lieutenant (Junior Grade).

Eric has also served with the Society of American Engineers - Guam Post as the Secretary since 2017. His enthusiasm in serving the 200+ member local chapter of SAME made him the “go-to” member for all inter-military operational tasks. He has led numerous volunteer community outreach projects including home building events, recruitment events, a veterans cemetery restoration, and infrastructure repair projects as part of Guam’s Island-wide Beautification Task Force. Eric also helped spearhead a Fund Drive that raised $10,000 for the American Red Cross to support recent super-typhoon relief efforts in Guam and the Northern Marianas Island.

Eric's next military assignment follows soon. He will begin Expeditionary Combat School in October 2019 before reporting for his next assignment to Naval Mobile Construction Battalion FOUR in Port Hueneme, CA.

Here's a link to the STEM Camp he has organized and led with SAME volunteers since 2017:

Find him on LinkedIn here: