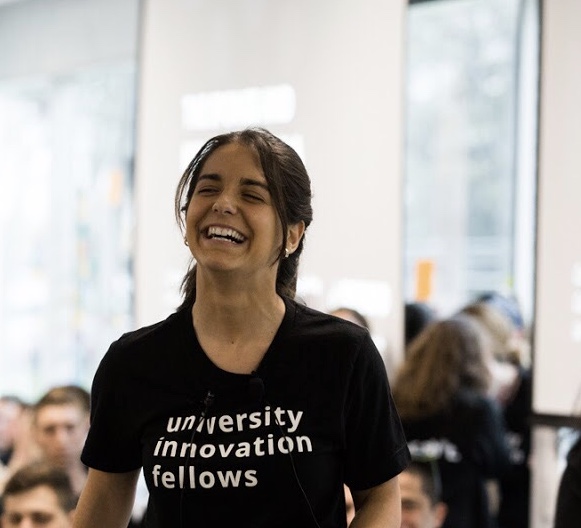 Carolina Vassallucci is a University Innovation Fellow since Spring 2018. She is a 22-year-old U

ruguayan student, who lives in Montevideo. At the age of 9, she was recognized by her school as a good communicator. That was the first time she recognized herself as an agent of change, as someone who is capable to potenciate her skills. That is why she is now studying Communication at the Universidad de Montevideo (UM). She has been in the university for the last 4 years, which has allowed her to know it thoroughly. Here, she was exposed to the University Innovation Fellows Program.

She defines herself as a sponge, but also as a magnet. On the one hand, like a sponge, because she always seeks to learn from bad situations and get the best of her, but also from those around. On the other hand, she considers herself a magnet, as she is passionate about human relationships, being a nexus that listens and unites people or situations in favor of a common goal. For these qualities, she was chosen by her classmates as a class delegate in college, but also in her high school years. This allowed her to approach her school, but now, the university from another side and to develop her abilities of listening, understanding and dialogue between her colleagues and authorities.

In addition, she is passionate about sports and playing in teams. She has been playing hockey since she was 6 years old and was also part of the national team.

Another of her passions is writing; and also helping others in this. That is why she is the responsible of communication of Repórter. This is a magazine that seeks to promote the writing of students and professors at UM. Moreover, in August 2018 together with other 40 Uruguayan students Carolina organized LOOP, the Innovation week, in Montevideo, Uruguay. She was one of the Communication's responsible. More than 500 people from different ages participated of a five-day event on innovation, inclusion and impact.

Entrepreneurship and education are also areas of her interest. Therefore, in February 2017 she launched CANARO, an organization that provides tutoring to high school and university students by other university students. When she graduates, she is planning to continue her studies on education and innovation through a Master and Doctorade.

Last but not least, Caro participated of the 2019 SVM as a Fab, together with two other more uruguayan Fabs (Lucía Rodríguez and Victoria Ferrer). Want to know the importance of being more like sponges and magnets? You can watch her ignite here.