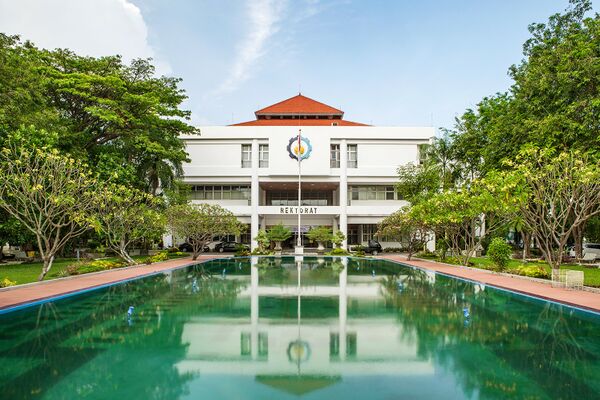 Rectorate building photo of ITS Surabaya

Institut Teknologi Sepuluh Nopember (ITS) Surabaya is one of the leading institutions in Indonesia, focusing on technology and innovation. ITS is attached to the history of the struggle for independence of the Republic of Indonesia. The establishment of ITS was pioneered by the independence fighters of the Republic of Indonesia since 1957, involving Dr. Angka Nitisastro, Soedjasmono, Kyai Haji Yahya Hasyim, and supported by Roeslan Abdulgani. A new motto for a new spirit in creating innovation through technology and knowledge for society. Advancing Humanity was chosen to be a new motivation to continue to play an active role in human civilization according to ITS ideals.
As a multicampus, ITS has several buildings spread around Surabaya:

The ITS Sukolilo campus occupies an area of ​​180 hectares and it is the main campus for the teaching and learning activities.

The Manyar Campus is home for the Civil Infrastructure Engineering Department and Vocational Faculty.

The Cokroaminoto campus is used for the Technology Management Masters Program, ITS IKA Office, and several cooperation programs.

ITS offers a variety of programs to study for undergraduate and graduate students. Undergraduate programs have six fields of faculty with 32 majors in total. Whereas masters and doctoral programs offer 20 and 15 majors, respectively. Academically, ITS promotes innovation through courses in majors, such as Technopreneurship, Concept of Technology, and several major-focused courses.
Apart from that, ITS also promotes the development of student entrepreneurship through training such as Entrepreneurship Management Training (LKMW) and workshops with consultation programs through PK2M and ITS Youth Techopreneurship events. Many student organizations promote interest in innovation and entrepreneurship through annual events such as competitions and seminars. Some of them are Business competition by ITS EXPO, seminars from SCHEMATICS NST, PKM League, and many more. ITS supports these activities with funding mainly from IKOMA ITS.

ITS has many ways to inspire student innovation and entrepreneurship, from training to awards. With as many as 19 domestic and 12 foreign funding sources for research, ITS supports student innovations by allocating funding for those in need and verified. The innovations developed also have the opportunity to be exhibited through annual events such as new student orientation, campus social media accounts (@its_campus), and campus news portals. ITS also has a team called Kesatria 10 Nopember to develop ideas and compete them through PKM (annual national event). In addition to these supporters, ITS also often awards students who develop innovation and entrepreneurship through competitions or other channels. ITS made strategic plans for entrepreneurship and research written in the Guide to Research and Community Service Activities and ITS Research Strategic Plan to regulate matters related to this.

ITS actively supports the university's technology transfer function through various activities such as having Technology Transfer Office (TTO) called Science Technopark, which conducts training for new students to introduce the TTO ITS. Besides that, ITS also organized two days camp with the topic of Digital Marketing called DMC held by PK2M, which aims to introduce new ways of marketing using the latest technology. Directorate of Innovation and Science Technology Area (DIKST) provides Intellectual Property Certification to every product made by ITS students before or after joining competitions based on scientific technology such as Shell Eco Maraton, KMHE, Robotic Contest, etc.

ITS facilitates students to collaborate with industry through several organizers, namely the Research Center, ITS Ditmawa, and PK2M. ITS has an organization called Career Development and Student Entrepreneurship, which facilitates students to develop their entrepreneurship with several industries. The activities offered from this PK2M are Investor Meeting and Exhibition Program, Internship, and Seminar. The ITS Directorate of Student Affairs (Ditmawa ITS) also provides internship programs called PMMB according to the majors studied by students with quotas for each batch of 2000 participants. Meanwhile, the research and technology development team has a Science Technopark which is open to industries that want to collaborate with ITS superior student products. One example is the 5G Experience Center which collaborates with Indosat Ooredo and Nokia. In addition, ITS also collaborates with external industries to expose students to several internships and independent study opportunities. This collaboration is conducted through Certified Student Internship Program (PMMB) and Kampus Merdeka.

ITS has carried out several activities to improve the local and regional economy, including the Bumi Iboe Program, which helps empower rural community businesses throughout Indonesia using the latest technology. Some Student management business activities are organized under the Directorate General of Higher Education, Ministry of Education and Culture (Kemendikbud RI). One of its programs is the Kampus Merdeka which is beneficial not only for students but also for society. In addition to that, ITS also collaborates with other parties to support the economy and development, such as PT. Santara, IKA ITS PW East Java, One-Stop Coworking Space, and PT Invitech. Moreover, lecturers in ITS usually hold an annual Community Outreach Program, which also invites students to engage in the process.