Polarity Mapping, also known as Polarity Thinking, is a visual framework for tackling problems in industry, team collaboration, and other challenges. It functions for paradoxical or costly challenges-- problems that can be exacerbated by focusing on one component more than the other. Polarity maps seek to weigh the costs and benefits of values within a certain problem and can be adapted toward any field. Created by Barry Johnson, this concept was created to help problems be solved in a realistic and multidimensional manner.

Polarity maps are commonly employed by StartingBloc, an organization that seeks to tackle community problems through social ventures and collaborations. They teach this method through workshops and hope that fellows utilize it to tackle personal, professional, and organizational paradoxes that may arise. 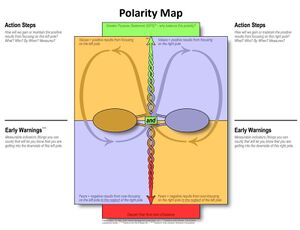 How Do Polarity Maps Work?

Polarity maps are dynamic visuals, as seen by the attached photograph. Functioning under the assumption that the poles, the quadrants that make up the map, are interconnected, the maps include weights of upsides and downsides that emerge when looking at a problem. Each side is incomplete without the other side, portraying a realistic feel to problems that surface in real-world scenarios.

Further, polarity maps are meant to be constructed and revised collaboratively. Groups work together to bring various perspectives to a similar problem, with hopes of canvassing a problem from all sides, ultimately keeping conversations useful and respectful-- maps are conducive to open conversation where no side is ignored.

Structure of the Polarity Map

Upsides are the positive results when focusing on a pole. Downsides are the negative results that emerge if you focus too much on one side. Alternatively, these can be seen as costs when weighing the potential actions taken to solve a problem.

The photograph allows for the visual to be seen; when each quadrant is assigned an "action step", certain values can be filled articulating the upsides and downsides. For the upper two quadrants, values placed in the boxes demonstrate the positive results that come from focusing on the specific poles. Alternatively, the lower two quadrants articulate the negatives that emerge when the "action steps" are overemphasized, consequently ignoring the other side. It functions as a system to achieve balance when solving a problem.

In order to create a proper polarity map, there are specific guidelines that are necessary. According to Learning Forward, an educative organization, the following steps are vital to a beneficial map.

The most important aspect of this step is to identify an issue that mappers have an ability to change and that has yet to be solved. Typically these are problems that can be solved within a short period of time.

6) Agree on a Higher Purpose and Deeper Fear

Implementation and Applications of a Polarity Map

In order to clearly see how a polarity map works, below is an image which shows the same thumbnail above, filled out. This was developed by Laurie Levknecht, a writer and nurse on Elsevier.

This map looks balancing work and home life. The top part, above the upside features a "sustained quality of life"; alternatively, the downside is an empty life, which comes with ignoring the balance of components of work and home life. 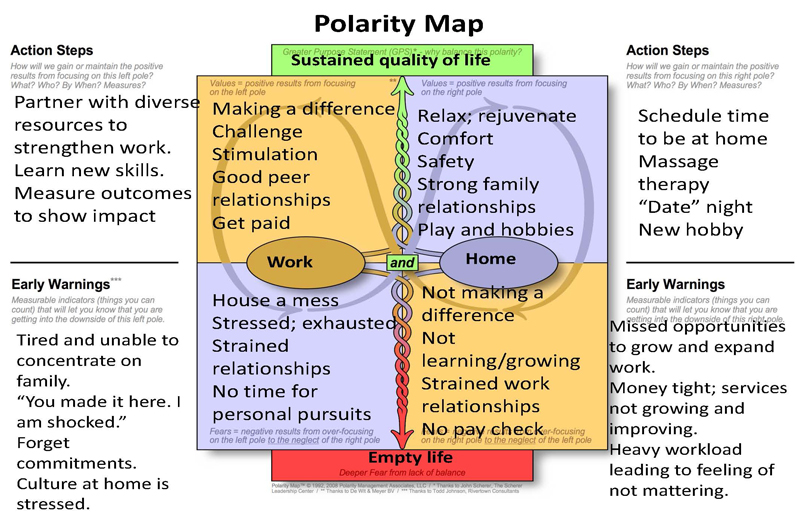 The diagrams and the hyperlinks above are sources to learn more about polarity mapping. However, in addition to these, are videos that are also useful and explain polarity mapping more in depth.

This TED talk provides information through the power of polarities.