The Awesome Foundation is a way to celebrate and support the brilliant ideas that every-day people have, and thus create more awesomeness in the universe and at large. Each independently-operated chapter under the Awesome Foundation supports entrepreneurs and innovators by awarding a $1000 grant each month to a really swell idea! No strings attached.

An Awesome Foundation "Chapter" is born when a group of 10 seemingly normal people (or unruly misfits) come together and agree to pool $100 each of their own money, every month. Some chapters are assisted by more than 10 donors to raise funds for the grant. The self-organized group then collectively decides upon a project to receive their collective $1000.

While the Awesome Foundation's first circle of ten originated in Boston, MA in 2009, it has since exploded into a worldwide phenomenon with 89 chapters and in 18 countries. So far, the Awesome Foundation has funded 3081 projects (that's $3,081,000!). Each chapter is completely autonomous, and organized around geographic location or topic of interest, including technology, arts, food, social good, and beyond.

Ultimately, it is a way for regular people to philanthropically support other regular people's dreams, because we all know that it is regular people have the most ingenious flashes of brilliance, wildest fantasies, and diversity of interest and experience in making something unique happen!

Tim Hwang founded The Awesome Foundation in 2009, to address his frustration with the unavailability of small amounts of funding for small projects. So, he rallied 10 friends to begin this experiment in 'guerilla funding'. In their home-made Foundation, anyone could be eligible for the $1000 grant by submitting a simple application on their foundation's website.

A few questions found on the application include the following: "Tell us about your awesome project!", "How will you use the money?", and "Tell us a little about yourself". Beyond these questions, applicants are given the opportunity to share photos or websites relevant to their projects.

They found that $1000 was a very sweet amount of money- it was small enough that the trustees did not worry about risk in what they were investing in, knowing another month would roll around fast, but it was plenty of funding to legitimize the awesomeness of a person's idea and motivate them to GO BIG with it (like an activation energy!). The grants began to create great ripple effects in the community; festivals funded once would reoccur annually, people's inventions would receive media coverage and lead to more inventions, and they would find highly commendable applications at home and abroad. Casual tinkerers were becoming bonafide citizen problem solvers in their communities, and it didn't take billionaires to get them started.

"We tap the really underestimated power of JOY- without joy the Awesome Foundation would be the Cheap and Efficient foundation, which is a lot less catchy." - Christina Xu, Trustee

In 2011, in the wake of the Haiti Earthquake foreign aid scramble, the Foundation established The Institute on Higher Awesome Studies with the resounding cry for alternatives to traditional forms of aid. Mainstream aid is plagued with many inefficiencies in short-sighted goals, rigidity and use of outsiders over indigenous resources and knowledge. AF recognized that their flexibility in being a sum of many decentralized small parts allowed them to adapt to tough aid crisis, chapter by chapter, month by month, and empowering task forces native to the areas they are trying to help. These chapters are already cropping up in New Orleans and Detroit.

Current Chapters and Some of Their Awesomeness

## ALL CURRENT AWESOME CHAPTERS ARE CLASSIFIED BY CITY OR TOPIC, NOT BY SCHOOL AFFILIATION ## 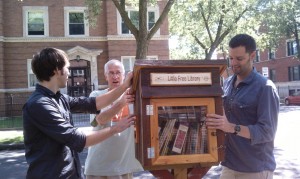 Awesome Chapters are becoming valuable nodes in their communities; creating a reason for very interesting, imaginative, cross-discipline people to encounter each other and public attractions which allow them to bond. Many Awesome Projects are very community-centric, here are a few:

Links of all current the chapters can be found here, and their blogs here.

Steps and Tips for Getting Involved

To Submit an Idea:

Anyone is eligible for a grant - individuals, groups, and organizations alike. Apply to the Awesome Foundation with an idea here. The form asks you choose which chapter you want to apply your idea to. Apply to chapters near you here.

Attributes of a good Awesome Project Candidate include:

To Establish a Chapter:

To start a chapter or join an existing chapter when a spot opens up, tell them about you on the Join the Awesome Foundation Form. To start a chapter, you will need to find 10 initial trustees who are willing to contribute $100 per month for an extended period of time, to sustain the new chapter. You can specify in the for if you are interested in being a Trustee or a Dean of Awesomness (time but no money contribution required).

This presentation by the Seattle Awesome Chapter has a lot of great details in what it takes to run a chapter (the first 15 minutes are the presentation, the rest is Q&A). On the 1st of each month they read idea applications and individually make a top picks list. On the 2nd they get together and decide collectively (i.e. talking it out till all the trustees agree, no voting). They award the money (as giant cardboard checks, money in sketchy paper bags, or even gold doubloons!?!) and appoint a "Storyteller" (usually the trustee most excited about the idea) to be a mentor and liason for them, to help them think through their idea and check in to see what happens.

You can drop them an email at contact@awesomefoundation.org, follow them on Twitter at @awesomefound, or track them on Facebook here.
For info on The Institute on Higher Awesome Studies, check out this article about its founding and their ongoing blog.

Check out this TEDxBoston talk, The Importance of Being Awesome, given by Trustee Christina Xu: