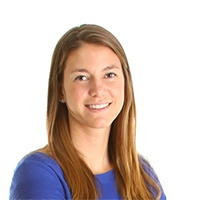 Zoe De Bruycker is a University Innovation Fellow and an MBA student at the Fuqua School of Business, Duke University. Her concentration is in Financial Analysis, and she is pursuing a career in Corporate Finance or Consulting. Zoe received an undergraduate degree in Business Administration from the University of North Carolina and began her career in Finance upon graduation. Her most recent role before returning to school was in Corporate Finance at Reebok in the Greater Boston Area.

Zoe is originally from Northern California, although she spent some of her childhood in Belgium and has dual citizenship to the United States and Belgium. She began playing tennis at a young age, and she was recruited to play on the varsity tennis team at UNC. During her time at UNC, the tennis program was ranked #1 in the nation in two separate years and won an Indoor National Championship.