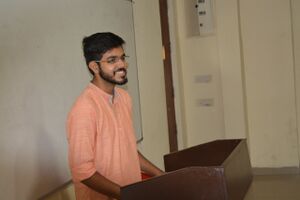 Venkatesh is an aspiring University Innovation Fellow and originally hails from Bihar. He moved to Greater Noida in 2015 to pursue Bachelor’s in Computer Science Engineering from Galgotias University. He had a stint as a backend developer intern in Cardekho.com. He is also a freelance content writer at Youth Ki Awaaz. He is very vocal about his viewpoints and dares to raise voice against wrong and unjust. His blogpost on his blog - Evowlive has been retweeted by the likes of Shashi Tharoor (Member of Parliament, India).

He firmly believes that his interest is swayed more in the areas of marketing and public relations. He founded a community in his University -  ‘Humans of Galgotias’ (now known as Hog Pick) where he encouraged people and provided them a platform to share their life experiences. This community is widely recognised in his University.

He also works as a member in the Galgotias Technical Society - IRIS and initiated the plan to spread technical awareness in his campus. He has given sessions as a speaker on emerging technologies like Bitcoins and Blockchain and Intro to Server Side Development beside handling the overall marketing and promotion of the organisation. He also leads an initiative with Deepak Kumar, (one of his colleague) to initiate and promote coding culture in his campus. Taking it forward, he is working to organise Microsoft Campus Hackathon  in his campus to foment a coding culture and develop an atmosphere of competitiveness. He has also anchored and hosted a TedX session in his University.