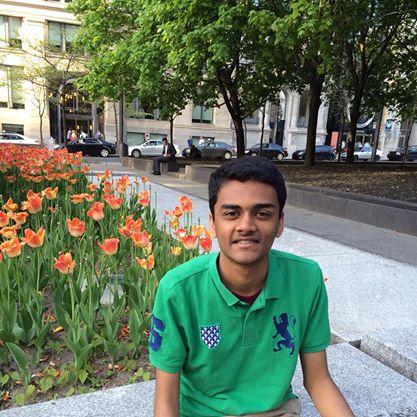 Valliappa Chockalingam (Valli) is a student interested in technology, physics, and psychology. He is currently a rising sophomore pursuing a B.E. in computer science at the University of Michigan, Ann Arbor. As other educational qualifications go, he earned the International Baccalaureate Diploma in 2013.

In terms of work experience, he was an IA (Instructional Aide) for EECS 203 (Discrete Mathematics) during his winter semester freshman year, and will be continuing the forthcoming semester. He has also worked as an intern at iVista solutions and EdGE networks, two tech. startups located in his hometown, Bangalore. At iVista solutions, he learnt web server development and web design techniques, and at EdGE networks, he learnt about natural language processing and machine learning. Additionally, at Taneja Aerospace, the largest private airport in India, he worked on aircraft design and aero-modeling.

Through his varied interests, he has taken part in many competitions, “hackathons” and research, a notable accomplishment being that he recently completed interesting research on water and food purity. This research study involved water and liquified food samples that were placed into an ultrasonic interferometer, an instrument that measures the velocity of sound in a given substance. Generally, the higher the velocity, the more the impurities in the sample. Different tables with graphs in both 2 and 3 dimensions were made to interpret this data. This research can be used in determining food adulteration and water purity through a simple near-harmless ultrasound wave. As an example to see the use of the research, Mangoes and Papayas in India are increasingly adulterated with Calcium Carbide, a known carcinogen. Another frightening example is that sixty percent of milk, a common commodity that is considered essential to the growth of children, is adulterated in India. Thus, the motivation for the research is clearly seen, to give consumers a method to easily choose between commodities, improve the safety of consumers, and attempt to cause major environmental impacts.

In the future, Valli plans to complete his undergraduate degree and start a company focussed on his interest, developing futuristic technologies such as artificial intelligence, robotics, nanotechnology, and genetic engineering by doing research and coming up with solutions to today’s plaguing problems. In a nutshell, he hopes to, in whichever small way, turn today’s world into a rather utopian world often seen in science fiction movies like Star Wars.