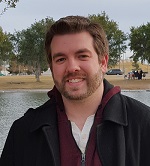 Many words can be used to describe Tad Davis, husband, student, employee, but who is he really? Tad Davis has been a husband for less than a year and still learning all about what that looks like, an employee for over 9 years and that's looked very different everywhere he's been, and as a student this is Tad's second go around. Being 27 years old and getting back into school was not an easy decision. Having established himself in the professional world it was hard to step away from that and enter school (again) for mechanical engineering. Tad was salutatorian of his graduating high school class and he went straight into college with less than two weeks from the time he graduated. Doing this for only about a year and a half Tad decided that school wasn't for him. He moved up in the retail world becoming the technology and hiring manager for Office Depot, and eventually got bored with that and moved to Lubbock, starting a company with his father called PC Accessibility.

Taking what he had learned in his time with Office Depot, he turned his knowledge into a job training course for individuals with disabilities, helping them to achieve employment and independence. Seeing people struggle with blindness but able to overcome this to learn to use computers through adaptive technology really gave him a heart for the disabled community. But how could he help these people to improve their quality of life in a more meaningful way? The answer: Go back to school and develop new technologies for these individuals. This ultimately led to the decision to go into mechanical engineering, the robotic hand that Luke receives in Star Wars was only a small part in making that decision (Tad's wife chooses to ignore this fact). Stepping away from his business was one of the hardest decisions he ever made. Though it wasn't the most lucrative enterprise, it was his and he was proud of it, but in order to focus on school and be the best student he knew how to be, it was necessary.