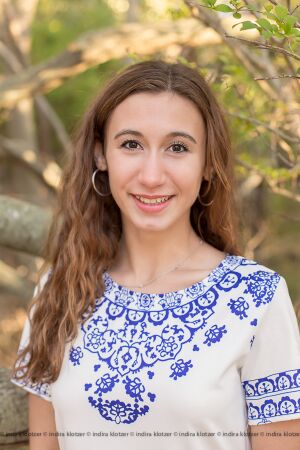 MD WEBl Images-19.jpg
Marina is a Sophomore at Union College in Schenectady, New York. She is currently a Music Major; however, she is in the process of creating her own interdisciplinary major to highlight her other interests in Environmental Science, Political Activism, and the Visual and Performing Arts.

At Union, Marina is a member of the Union College Jazz Ensemble where she plays the clarinet. In her spare time Marina plays acoustic guitar, bass guitar, and sings. She is currently collaborating with a SUNY Purchase student to record and co-produce a demo of her original songs. Once complete she hopes to begin working on an EP. Marina is interested in many art forms besides music; she is a dedicated member of her campus’s Improv club and loves to make people laugh. Marina is also a Union College Writing Fellow and serves as a writing tutor for at least five hours a week during the school year. To stay active Marina participates in intramural volleyball and is on the Union College rugby team.

At home Marina works full time as a reservations agent at a local resort. She is a brilliant problem solver who fearlessly tackles the daily challenges that occur on the property. In her free time Marina volunteers with Group for the East End, a local environmental education and activist group. The Group works to protect wildlife in New York State, focusing primarily on the Long Island region. They make their impact through education, conservation, and advocacy. Prior to her college career Marina had many impressive athletic and artistic acomplishments. She was a five-year, varsity volleyball starter, serving as captain her senior year; she was also a captain and a strong force on the varsity track team. She received many accolades in both sports ranging from “All-League” to “Most Valuable Player”. Marina was also chosen to receive an “Award of Excellence” for her portrait in the Parish Art Museum's 2016 Student Exhibition.