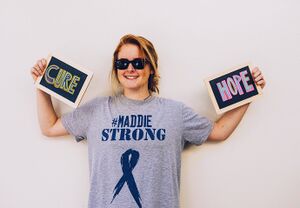 Madison Davis, or Maddie, is currently training to become a University Innovation Fellow. Maddie is in her second year at York College of Pennsylvannia as a Middle Level Education with a Science Concentration. This is science for 4th to 8th graders. Additionally, Maddie is an active member of the Graham Innovation Scholars program and Delta Phi Epsilon. Maddie also has experience serving on YCP's Student Senate.

Maddie grew up in Annapolis, Maryland area and attended a rigorous college-prepatory private catholic high school. In middle school, she went to a Charter School, Monarch Academy, which her passions in education are driven from. She believes quality and meaningful education is important to be introduced as early as possible to implant confidence and motivation. Because of these dreams of making sure children have this opportunity, she started her own business called Guppy Tank. The quote, "be who you needed when you were younger" and Design Thinking is the foundation of the idea.

Another passion of Maddie's is advocating for Children's health. In high school, Maddie had to battle the 2 in 1 million odds of being diagnosed with Juvenile Dermatomyositis. Luckily, with her driven and optimistic spirit, within 2 years she became the teen advocate for the Cure JM non-profit organization. Additionally, she is a public speaker on her experiences for CSI Pharmacy and advocates for new effiecient medicine for children.

Maddie is most interested in pursing her doctorate in education to remain actively involved in the change for innovation in education. Maddie's dream would be having a franchise of charter schools that actively taught design thinking and focused on the development of children emotionally, socially, empathetically and intellectually.