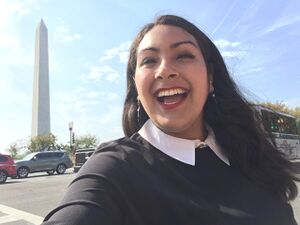 and Marketing minor at Pepperdine University. She is interested in creating easily digestible online/multimedia content for media sites and in innovating the future of the music and journalism industries. She says she has a great heart for people, education, and storytelling.

An East Los Angeles native who decided to make the trek to the westside, she pursued Media Production and Creative Writing at Pepperdine University during her first year. However, her experiences at the college newspaper, the Pepperdine Graphic, inspired an interest in journalism as a form of storytelling that led her to switch her major. During the first semester of her junior year, she worked as the online video news producer and set up a new standard of quality. She was nominated by her journalism advisers to be part of the team to create the Pepperdine Institute for Entertainment, Media and Culture. This experience led her to the University Innovation Fellows.

Kelly currently works as an assistant for the semester-long effort, Currents Magazine, at the Pepperdine Graphic. When she's not living in the newsroom, she serves the student body as co-president of a campus ministry and works with preschool age kids in Canoga Park as a Jumpstart Corps member.

Her lifelong love of the performing arts led her to attend Ramon C. Cortines School of the Visual and Performing Arts in downtown Los Angeles where she studied Musical Theatre. There, she was part of a total of 6 productions, including the world premiere musical "Musical Fools." She also studied abroad in Shanghai, China last year to study Chinese language, culture and history as well as business. She really wants to go back.