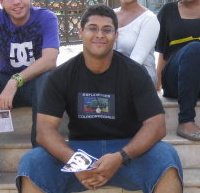 Jonathan Diaz Sepulveda is a student at the University of Puerto Rico - Mayaguez. He was originally studying computer engineering but later switched to pursuing a bachelor's degree in Linguistics. This extreme change came to happen because he found out that he loved the entrepreneurial concept and wanted to submerge himself in this world. Engineering being the amazing world it is did not leave much free time to do so.

Jonathan has had a very busy extracurricular life.  He has been a member of the IEEE student chapter in his campus for the past 6 years. During which he was Vice President and President of the Control System Society. He was also the President of the whole IEEE UPRM Branch organization for two years in a row being the only president to do so till this day.  Within the IEEE he has helped students become better leaders and has helped develop new programs such as the Professional Development Workshops and the IEEE Scholar program. This two programs help students develop their professional skills to be able to get better job opportunities and higher chances of becoming a leader within the organization. Currently he is the IEEE Vice President of Internal Affairs in which he oversees all matters that relate to HR within the IEEE. He is also developing the IEEE R&D which will provide students the opportunity to develop their own projects and the IEEE will grant them funding to pursue such endeavors.

Alongside with the IEEE his last and current endeavors revolve around Entrepreneurship in which he created his own student organization called APE (Association of Programmers and Entrepreneurs). This organization is to promote entrepreneurial action within the hacking community and with their Hacker Socials they have created a community of mentors and hackers that help each other to create, learn and compete in our university.

He is also creating his own Startup called Plazsa. His startup aims to change and improve how local economies interact in today's global market. With the help of local incubator Vitec he and his team are on their way to making the company into a reality.