What he does now: Currently working as an Digital Media Instructional Designer at the University of North Dakota

What that means: I work with faculty across the entire university and even the state for course creation, design, and pedagogical needs for their students. I also serve on boards for student advocacy and moving the bar forward in ways to help students as much as possible. I work with many different hats, but I try to be the best I can be within my role and help anyone who may need it. 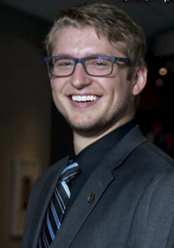 Technology (IDT) at the University of North Dakota (UND). Originally from Le Mars, Iowa, he attended UND in pursuit of his undergraduate degree in Commercial Aviation at the John D. Odegard School of Aerospace Sciences. During his pursuit of this degree he got involved with building computers and helped a few friends along the way to build their own. During that process a good friend said he should start a computer building company, so he did just that. Fast forward four years and Jon was already on his fourth business, he had caught the entrepreneurial bug. Jon decided to follow his new passion of entrepreneurship and changed majors after two full years of aviation school. Jon graduated in the Spring of 2016 with his undergraduate in Entrepreneurship through the School of Entrepreneurship at UND.

During his undergraduate in entrepreneurship Jon found a severe disconnect with students and their academic pursuits. This entailed from the emphasis of content rather than the student. Two days after graduation Jon was already started on his graduate program in IDT. Jon aims to change the way education works from a content focus towards a student perspective. Pursuing his Master’s degree is just the first step towards a far loftier goal he has planned, which is to build or be the president of a college. He also wishes to pursue his PhD in education eventually but isn't sure when exactly.

Jon is heavily involved with his peers and fellow entrepreneurs. He has helped start multiple businesses ranging from Bitcoins oriented firms, 3D printing, to UAV companies such as SkySkopes. Looking into the future he is helping students become more as often as possible, allowing them to push their own limits for their own futures. Jon has also been working with his fellow students to build a new student platform called Dedicated Individuals Bettering Society, or as they call it, DIBS. This organization raises the expectations of students, giving them the ability to do, even when a climate says they don’t have that option, giving the students the power to make change on their own playing field.