George Valcarcel is a highly motivated second year student at The Ohio State University, majoring in Industrial and Systems Engineering with minors in business and history as part of the fourth Integrated Business and Engineering Honors (IBE) cohort. He discovered UIF while in the process of co-founding IRIS, a new student organization at Ohio State aimed at exposing students to the multidisciplinary realm of product development and product management with the tools of the Lean Startup and Design Thinking. George is committed to enhancing the expansive Innovation and Entrepreneurship ecosystem on campus, with a specific interest of fostering collaboration across programs siloed away in different departments and areas on campus. 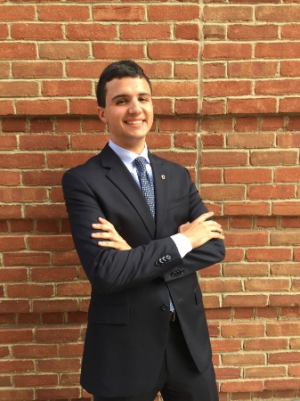 Early in his career, George's professional interests include management consulting and product management. The summer after his freshman year, he completed a new product development engineering internship with GE Aviation. This coming summer, 2018, George is excited to dive into consulting by moving to Chicago to join McKinsey and Company as a summer business analyst. On campus, George serves in a variety of roles including: Vice President of Membership Development of Buckeye Undergraduate Consulting Club (BUCC), Co-President of IRIS, Director of Operations for the IBE program's student board, College of Engineering Ambassador, and co-chair of the 73rd Sweetheart's Ball hosted by his cultural fraternity Sigma Epsilon Phi.

Growing up in Mason, Ohio, George from an early age demonstrated his ability to set lofty goals and motivate others as a leader. While at William Mason High School, he earned the rank of Eagle Scout, placed 4th in the nation and marched in the Pasadena Rose Parade as a section leader in the marching band, performed in the all state and national honor concert bands as a bass clarinetist, and was named conference player of the year, leading the quiz team as captain to back to back league titles and first state appearance in over a decade. George is a lifelong Buckeye fan, and can be found at every Ohio State home football game in "the Shoe", in addition to rooting for his hometown Cincinnati sports teams, the Reds, Bengals and FC Cincinnati. His other hobbies include playing squash, intramural basketball, improving his golf game, following Drum Corps/Marching Band, attending the symphony, travelling/sightseeing and trivia - with his strength in history and geography.