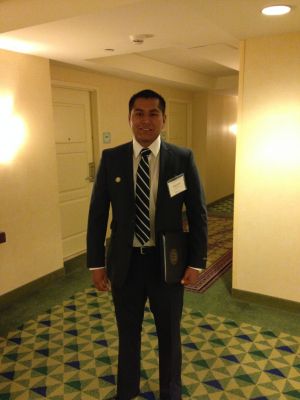 Eduardo Rojas-Flores joined the UIF family during his third year as a Mechanical Engineering student from the University of California, Merced.  Eduardo founded AIAA at UC Merced an organization with intentions to provide guidance and support for students pursuing an Aeronautical/Astronautical career. AIAA at UC Merced focuses on hands on experience within California’s Central Valley allowing members to build their resumes and enter the Aerospace/Aeronautical field after college. The organization quickly grew in resources and support from the University and Professional companies. It held the student region conference post Eduardo's departure from the University, however his efforts were recognized by the student organization and now they continue to uphold the founding misssions. The organization now has a working relationship with Lockheed Martin and an annual buget of $30,000 with over $150,000 dollars of funding since its founding.

After establishing the orginazation and becoming a fellow, Eduardo then became a Nasa Solar system Ambassador Volunteer for NASA-JPL. https://solarsystem1.jpl.nasa.gov/ssa/biography.cfm?US_ID=1340 His purpose is to become a role model for immigrant students as a future innovator in aeronautics, a humanitarian and policy maker. Through the program he has presented over 10 talks and held various events for students and parents of all ages.

His vision for his campus is to foster a competitive pool of students whose goal is to integrate California’s Central Valley’s economic, environmental and social needs into their own ambitions, for students to start to engage in solving real world problems.  By using the tools  provided by the University Innovation Fellows program, he hopes to aspire  constant innovation and breed the entrepreneurial spirit for UC Merced’s student body.

Eduardo Rojas-Flores now works in the Self Driving Car Industry as a Test Engineer and is thriving in due part to all the teachings of becoming a University Innovation Fellow.