Donovan Gayles, also known as Don, is a senior Political Science and Public Policy double major, with a minor in Economics. On-campus he serves in 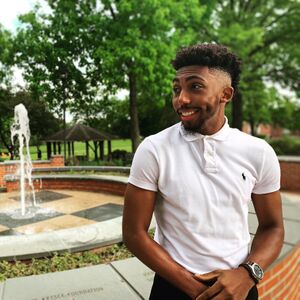 many leadership roles and committees of different organizations. He is the president of the Student Government Association, a Senior Community Assistant for upper-class housing, the Alumni Chair for his fraternity, and a student worker at the Office of the Provost. Off-campus, he spends his time mentoring middle and high school students al over the country through a program known as Student Success Agency.

Donovan is a big advocate for change and social justice within communities and has exemplified this behavior by working in Non-Governmental Organizations in different countries around the world including Spain and Hong kong. He has also attended many professional development pieces of training nationwide including Netroots Nation in Philadelphia and the National Conference on Race and Ethnicity in Portland.

He became a Univesity Innovation Fellow because he is passionate about innovation and design and using that to better the world around him. He believes that everyone has the ability to enact change in the community around them and no idea is too little or too large and with a positive mindset and attitude anyone can accomplish anything.